US Agrees to Work with Mr. Modi 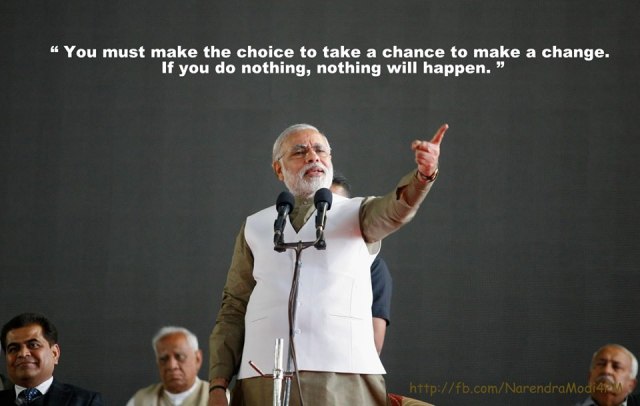 Those  who have been following my posts as the self-proclaimed American campaign manager for Mr. Modi, know that the US has denied him a visa to visit America. Yes, that decision  was made in 2005  based on the unproven allegations that he was complacent  during  the 20o2 riots, where sadly, many Muslims were killed after many Hindus were burned alive on a train.  Well, the US and Indian awkwardly  have  added a new step to the Modi Dance!

Last week, Mr. Modi addressed Indian Expats via video conference that was shown in  18 American cities. He addressed his views and work on global warming, solar power, malnutrition, and the building of the Unity Statue which will be in Gujarat and the tallest statue in the world.  He applauded the Indians living in America for their success and worldwide contributions, and he did not mention why he was not addressing them in person.

Now Mr. Modi’s star is rising in India, and he is likely to be elected Prime Minister after the parliamentary elections in 2014. He is heralded for the business friendly atmosphere in Gujarat, and is adored by the educated 20 year olds and their hope of entering the middle class. The Congress or opposition party has been in control for about 40 of the 60 years since independence from Great Britain.  The Congress party is beset with a  raucous list of corruption scandals.According to the Express Tribune newspaper, there is massive embezzlement, and 30% of politicians  in state and federal government are facing charges of serious crimes such as rape, murder or kidnapping. This is the legacy  of the Nehru/Gandhi family dynasty in the Congress Party.  The Indian Supreme Court cleared Mr. Modi  and 61 others this year from the charge of  complacency during the 2002 riots. There are Modi haters who don’t want to let go of these accusations. To me it is jealously because after all,  he has been elected Chief Minister overwhelmingly in his state Gujarat for four terms. There have been no further  riots in Gujarat since the horror of 2002 and Muslim Indians are coming there for employment.  Earlier  this year, Mr. Modi was invited to speak at Wharton  Business School in Philadelphia  and  then  uninvited because of liberal demonstrations  against him and no visa to travel here.  The European Union has dropped its boycott of Modi because the allegations against him have not been proved.

The US must be realizing that we  need the world’s largest Democracy and  now changed  its policy. The position now is that if Mr. Modi is elected Prime Minister of India next year, they can work  with him.  How condescending!   Mr. Modi’s popularity in his country and  the world is growing.  See this link that was reblogged on my blog yesterday:

Goldman Sachs, one of the world’s elite investment banks, has “Modi- fied” their position on India and upgraded it to  market weight from under weight, purely on the prospect of Mr. Modi being elected to Prime Minister next year.   So now the US government has decided that they can work with Mr. Modi?  I wish I could ask Mr. Kerry and Mr. Obama how and why can they talk to Syria, Egypt, Iran , and China with the proven human rights violations in those countries but  are holding disproved events and accusations against Mr. Modi, a strong vibrant leader for democracy and freedom?

In my opinion, it appears that India with still many challenges to overcome, is the emerging democracy in the world with hope and success  just over the horizon and the US is losing her way and is headed into decline.  I am waiting to see if the “brain drain” from India to the US will slow or stop if Mr. Modi is the new Prime Minister in 2014.  I am pretty confident it will!

Namaste. . .  .. This Is Indian and American Politics!

from The Christian Science Monitor and The Financial Times

47 Responses to US Agrees to Work with Mr. Modi