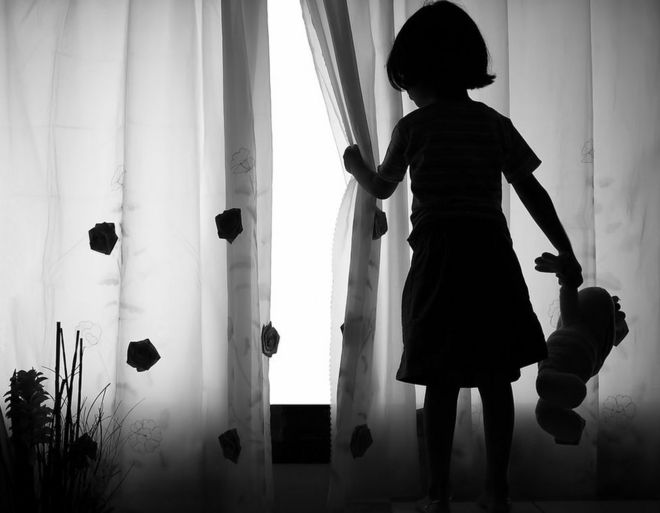 A 10-year-old girl who is pregnant and has been refused an abortion is at the centre of a media storm in India. The BBC’s Geeta Pandey travelled to the northern city of Chandigarh to piece together her story.

“We have seen lots of cases of teenage pregnancies involving 14 to 15-year-olds, but this is the first ever case that I have seen of a 10-year-old,” said Mahavir Singh, of the Chandigarh State Legal Services Authority.
Mr Singh has been involved in a case which has shocked Chandigarh and the rest of India, that of a 10-year-old girl who became pregnant after allegedly being repeatedly raped by a relative.

That relative is now in jail, pending trial. 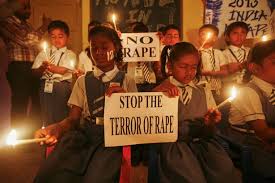 The girl in question has been described as a happy child who smiles easily. She’s shy and not very talkative. English and mathematics are the favourite subjects of this class six student. She loves to draw and is pretty good at it. She can’t get enough of her favourite cartoon shows Chhoti Anandi (Little Anandi) and Shin Chan. She loves chicken and fish – and ice-cream.

But on 28 July, India’s Supreme Court rejected a petition – filed on her behalf – to allow her to abort, on the grounds that at 32 weeks, she is too far into her pregnancy. A doctors’ panel had advised the court that a termination at this stage would be “too risky” for the girl, and that the foetus was “doing well”.
The court order was a huge disappointment for the girl’s family.
‘She has no idea what happened’
Indian law does not allow terminations after 20 weeks unless doctors certify that the mother’s life is in danger.

But in recent years, the courts have received several petitions, many from child rape survivors, seeking to terminate pregnancies after 20 weeks. In most cases, these pregnancies are discovered late because the children are not aware of their condition.
A campaign against child sexual abuseImage copyrightGETTY IMAGES
Image caption
In India, a child under 16 is raped every 155 minutes, a child under 10 every 13 hours
In the case of this 10-year-old too, the pregnancy was discovered only three weeks ago when she complained of pain in her lower abdomen and her mother took her to a doctor.
Someone who interacts with the girl on a regular basis says: “She’s very innocent and has no idea what’s happened to her.”
Her parents also missed the telltale signs, perhaps because she’s “a healthy, chubby child”. Besides, they couldn’t imagine even in their wildest nightmares that their daughter could be pregnant at 10.
The child has still not been told about her pregnancy and, for those dealing with her, talking to her is like treading on eggshells. She has been told that she has a big stone in her stomach and the bulge is because of that.
She’s been put on a special diet of eggs, milk, fruit, fish and chicken and she seems to be enjoying the extra attention.
But in recent days, police, social workers and counsellors have been in and out of her house, and a media circus has grown up outside her home.
“She might not understand the exact problem, the gravity of the situation, but I think she has some idea now,” a senior official told the BBC.
No abortion for 10-year-old rape victim
Why an MP wants India to talk about child sex abuse
The Indian girls who survived being raped
Her parents are struggling to deal with the situation. The family is poor and lives in a cramped one-room flat. Her father is a government employee and the mother works as a domestic helper.
Policewoman Pratibha Kumari, who has investigated the case, describes them as a “very nice family, who are so simple that they didn’t even realise what this man was doing to their daughter”.
The parents, she says, are understandably distraught. “Her mother has never talked to me without crying. The father says he feels like his daughter has been murdered.” 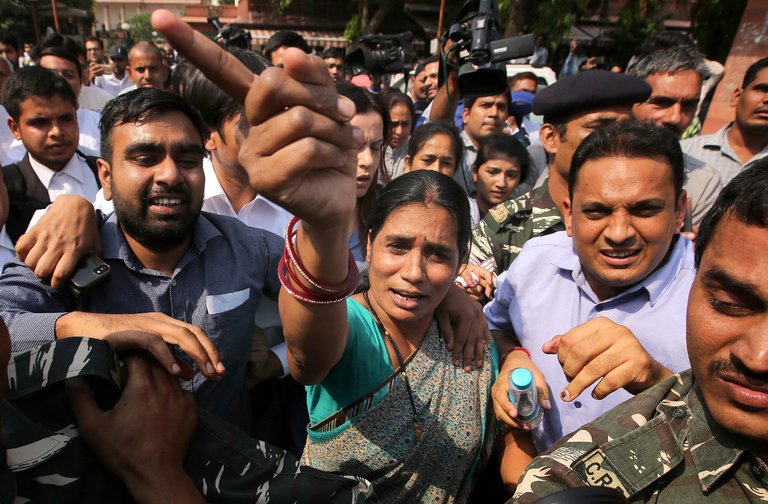 The scale of abuse in India
A child in India (file image)Image copyrightAFP
A child under 16 is raped every 155 minutes, a child under 10 every 13 hours
More than 10,000 children were raped in 2015
240 million women living in India were married before they turned 18
53.22% of children who participated in a government study reported some form of sexual abuse
50% of abusers are known to the child or are “persons in trust and care-givers”
Sources: Indian government, Unicef
What has made their situation worse is that, ever since the news of the rape and pregnancy hit the headlines, they have been hounded by journalists.
“When the girl’s father came to see me, he told me his biggest problem was the press. He said there were reporters outside his home all the time and his privacy was being infringed upon,” Neil Roberts, chair of the Child Welfare Committee, told the BBC.
The media attention has meant the girl is likely to get the best medical care and is entitled to claim financial compensation from the government.
But the unwanted publicity is causing the family immense grief. Many of the reporters went to their house when the father was at work and gained entry claiming to be child workers.
Since the alleged rapist was the mother’s cousin, some even questioned if she was aware of the abuse and, maybe, even approved of it. “How come she didn’t know that her daughter was pregnant for seven months?” they asked.
This has been very troubling for the family, and the girl’s father is angry and bitter.
“I want him to be severely punished. He should get the death penalty or be locked away for the rest of his life in prison. He has admitted to the crime. But he has never said sorry to us,” he tells me in a brief phone conversation.
Before hanging up on me, he asks: “Why are you advertising my daughter’s case? The press have turned this into a business enterprise.”

Campaigners say 50% of abusers are known to the child or are “persons in trust and care-givers”
His anger is justified – even though there are laws that expressly forbid journalists from revealing identities of rape survivors and child victims of crimes, many people have been able to join the dots and identify the family because the alleged rapist’s name was extensively reported in the Indian press. Now their neighbours and his work colleagues know. Possibly the child’s school friends know too.
A local journalist, who met the family in the early days, says the parents are worried sick about the girl’s future and the stigma she will face when she grows up. The father has also spoken of his worries over her health.
Medical tests so far show that her health is “good” though she suffers from “mild anaemia”.
But there are other concerns. The girl was born with a hole in her heart, which was plugged in 2013. Although doctors say it’s unlikely to interfere with her pregnancy, the fact remains that she is way too young to give birth.
Every year, 45,000 adult women die during childbirth in India. The risk of pregnant girls under the age of 15 years dying is two-and-a-half times higher than that for women above 20. Doctors say the risk is even higher for someone who is only 10.
It’s a concern the Supreme Court took on board, but the judges still ruled that the pregnancy could continue.
So what will happen next?
Those in the know say the baby is due by the middle of September and the doctors have decided that it will be a Caesarean delivery. In case of any complications, the birth could be earlier.
Since the girl’s family have said they want nothing to do with the baby, the newborn will be looked after by the child welfare committee until it is put up for adoption.
Medical experts say the 10-year-old is bound to suffer from mental trauma and will need years of counselling from a child psychologist.
“We’ve got our fingers crossed for her,” said a child rights worker. “Can a 10-year-old deliver a child? Could it be life threatening for her? We are praying that nothing bad happens to her.”

Author’s note:  Today, I read that the Supreme Court of India has ruled on permission for the little girl to have an abortion. (India does not permit abortion after 20 weeks of pregnancy. The little girl didn’t know she was pregnant.)   This is a very tough case for me. I am strongly pro-life and believe two wrongs don’t make a right.  That wee baby did nothing wrong and didn’t ask to be born. But this little girl is only 10!  I hope she will be safe during this ordeal and given the care physical, spiritual, and psychological  she needs provided for her.  On the other hand, I am not Indian and would not presume to  interfere except to give my opinion.  I love Incredible India and pray this culture of rape and abuse on woman and little girls, will be stopped. I pray for a trial and justice in sentencing to be a strong message to other  would be abusers.

I am a retired elementary teacher, well seasoned world traveler,new blogger, grandmother, and a new enthusiastic discoverer of the wonderfully complex country of India. Anne
View all posts by annetbell →
This entry was posted in India, Uncategorized and tagged abortion, India, pregnancy, Rape of 10 year old, violence against women and girls. Bookmark the permalink.