Posted initially  on February 17, 2013by annetbell

Our trip began at five in the morning for a one-way five hour tour coach ride. Travelling in the country is slow going as many of the roads are only two lanes. It was quite nerve wracking as I had not learned to close my eyes, but watched as the cars, wagons, and bikes would seemingly play chicken with oncoming traffic while trying to pass. At the last minute, one or the other would return to their safe lane and an accident would be avoided. I kept thinking the bus is safer and bigger, right?

Palitana, (pronounced as in Italian) is an extraordinary cluster of sacred architecture consisting of one thousand Jain Temples. Most date to the sixteenth century, and the earlier parts of the complex were destroyed by invaders. The shrines are scattered over twin summits, and the climb is 2 ½ miles one way, accessed by 4000+ steps. The guide book says it is a hike of about 2 hours each way, though it took us longer. 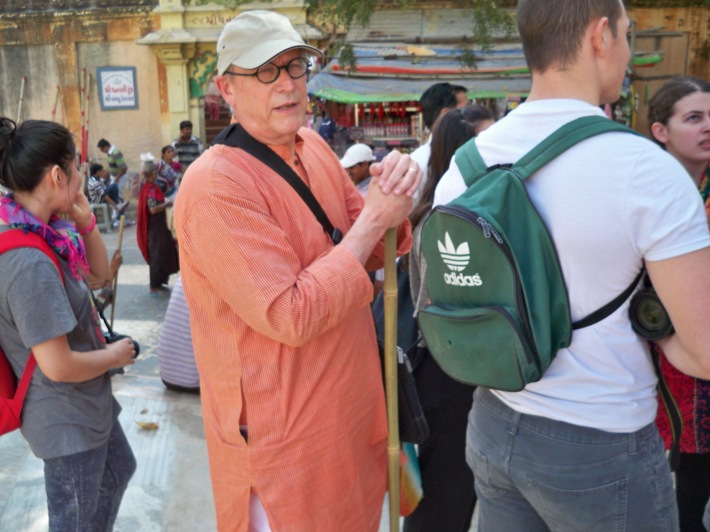 David and the students completed the hike, both up and down with their handy Ghandi bamboo sticks. I tried, giving it my best, with my trusty stick. There were carriers who work in pairs or double pairs carrying those who are unable to walk either to the top or the bottom. I didn’t want to think I needed carrying either because of my age or health. On the way up, I struggled about halfway walking and resting, and catching my breath. I was asked repeatedly if I wished to be carried and I would reply, “No thank you.” When my chest started to tighten up, I relented and ignored my pride. It was not worth having a heart attack on a mountain in Gujurat! 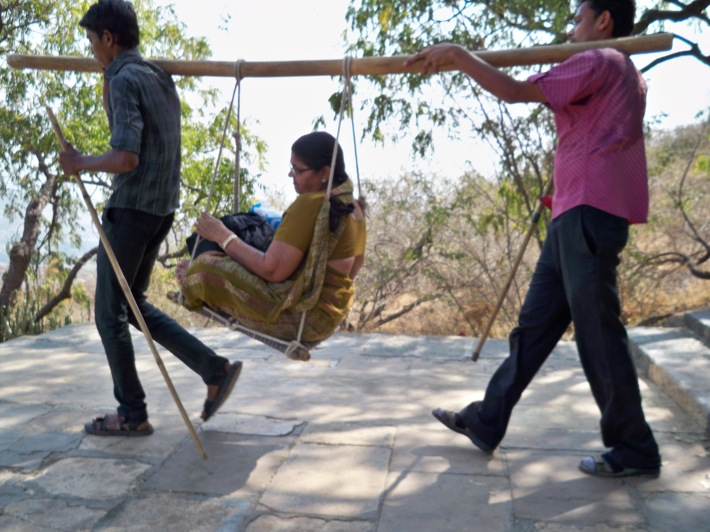 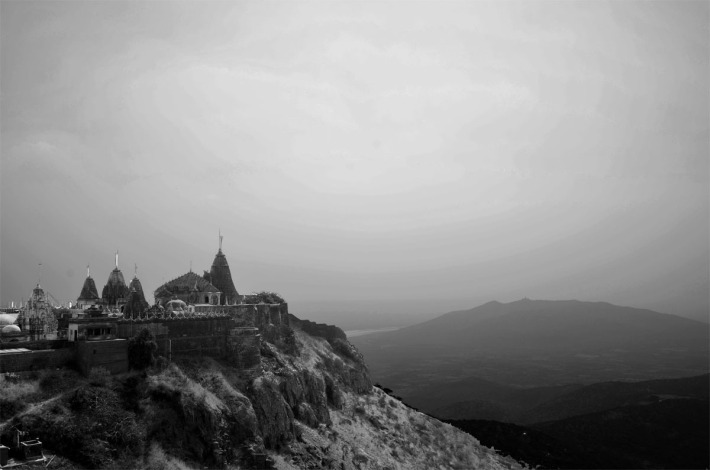 After time at the temples, we started our descent. The two men who had carried me halfway up, appeared and walked beside me as they regularly inquired, “Ride, auntie?” (Women of a certain age are called affectionately and respectfully, auntie. Men are called, uncle.) I was rested and my pride had returned. Surely, I could walk down, but again I had about 2000 steps in me when I gave in and climbed aboard the seat. I must have been a hilarious sight as I was not able to sit in the yoga position and my feet were extended as I sat sideways! I am hoping I am not on You Tube! Give me a heads-up if you see it and don’t laugh!

Our second visit was with one huge difference.  We visited on our way back to Ahdavad and spent the preceding night in a hotel.  We arrived at the sight about 5:30 with the pilgrims in white , just as the sun was rising ,and the temperature and sunlight were much for tolerable. Several of to the students completed the journey up and down in just a couple of hours. I doubt they spent much time exploring the temples, tiny to large, but that was quite a lot of steps , nonetheless!

I am a retired elementary teacher, well seasoned world traveler,new blogger, grandmother, and a new enthusiastic discoverer of the wonderfully complex country of India. Anne
View all posts by annetbell →
This entry was posted in Architecture, India, Religions of the World, Travel, Uncategorized and tagged 1000 temples on the mountain top, 4000 steps, architecture, Gujarat, India, Palitano, pilgrims, sacred architecture. Bookmark the permalink.