“The Boys in the Boat” by Daniel James Brown 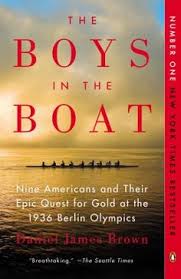 For my readers. . . .  .* * * * *  This is a wonderful story, wonderfully written.  Brown’s descriptive writing in this nonfiction narrative story includes  word pictures of the Dust Bowl, the Depression, Germany as Hitler began taking away freedom after freedom, and the 1936 Olympics.  It also includes details of the training and the building of the boats, but just enough to educate and not enough to bore. . . .  Brown seemed to know when enough is enough!   I loved the story of the boys and their dedication, hard work, overcoming extreme poverty, and their determination and tenacity of fulfilling their American dream.

From Pocock , the English boat builder again: “Reaching farther into yourself to discover hidden strengths and capacities. Doing more than you individually thought possible and doing so in service of a team goal.”

“Standing there, watching them, it occurred to me that when Hitler watched Joe and the boys fight their way back from the rear of the field to sweep ahead of Italy and Germany seventy-five years ago, he saw, but did not recognize, heralds of his doom. He could not have known that one day hundreds of thousands of boys just like them, boys who shared their essential natures—decent and unassuming, not privileged or favored by anything in particular, just loyal, committed, and perseverant—would return to Germany dressed in olive drab, hunting him down.”
― Daniel James Brown, The Boys in the Boat: Nine Americans and Their Epic Quest for Gold at the 1936 Berlin Olympics