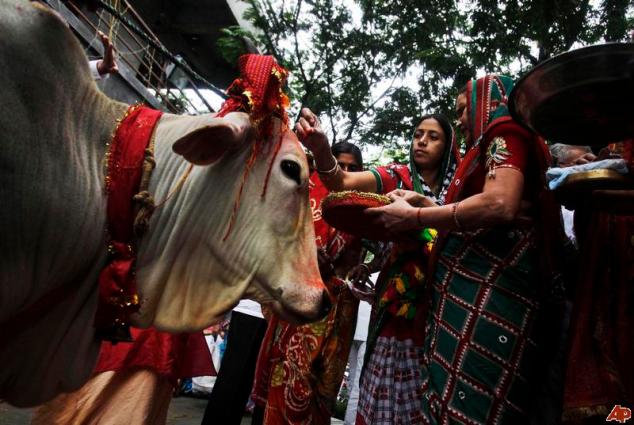 Mother Cow is the queen in the pantheon of sacred Indian animals. In fact, she stands head and shoulders above the rest. There are group all over Indian demanding the government name the cow as the national animal to replace the tiger which currently holds that honor. You might wonder how this all came about.  Many years before the  pyramids were built in ancient Egypt, or written law chiseled into stone by Hammurabi,  or paper invited by the Chinese, the Indian people had given up their nomadic wanderings. They had settled down to an agricultural lifestyle. This was before coins were used as money, and wealth was determined by the number of cows owned by the farmer. Cattle became legal tender and were used as payments, presented as dowry, and even used to pay the hated taxes!  Through the ages, cow’s milk has been often the only source of nourishment for India’s vast population.

Another gift from the cattle is the dung which is still used in construction  of rural  homes   and as insulation on walls, and as tiles for the floors. The cow pies are burned in the cold weather and used for cooking  as the only source of fuel for the Indian village dwellers. 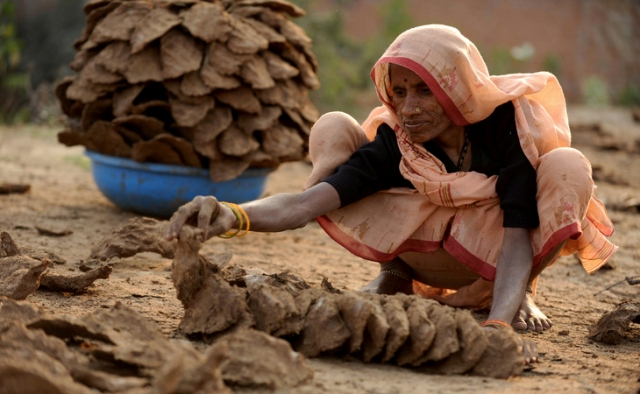 When the cows stop producing milk, they are abandoned by the farmers because they are of no use anymore and can not be taken to the slaughter house. This is why they are cows strolling through the the chaotic city traffic serenely ignoring the madness all around them instead of grazing in a village field.

Recent studies have concluded that Indian cows hang around on busy streets because  the prolific exhaust fumes discourage flies which torture the bovines.   Another perk for the cows are that the toxins in the fumes make them high.  They often do appear very relaxed!  So the chaos they can cause stopping traffic and generally being in the way is quite a good place for them !

Pedestrians in India have to look right, left, right again when  crossing the crowded streets to avoid being hit by cars, rickshaws, camel pulled carts, motor bikes, pedal bikes, as well as glance down to avoid stepping in fresh cow dung.  We were told it was a “blessing” from the cow if we walked through the dung.  Though, we all loved getting blessings on our foreheads, we eagerly avoided the “foot blessing!”  Holy cow! 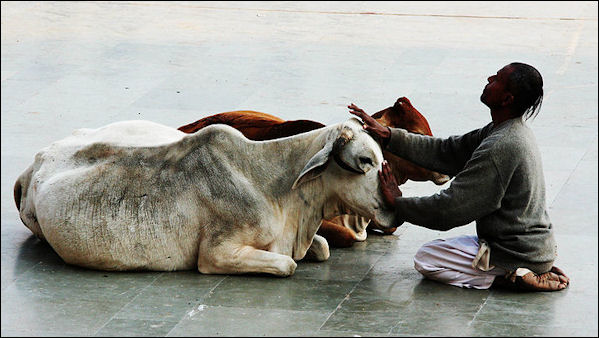 The Holy Cow by Tarun Chopra