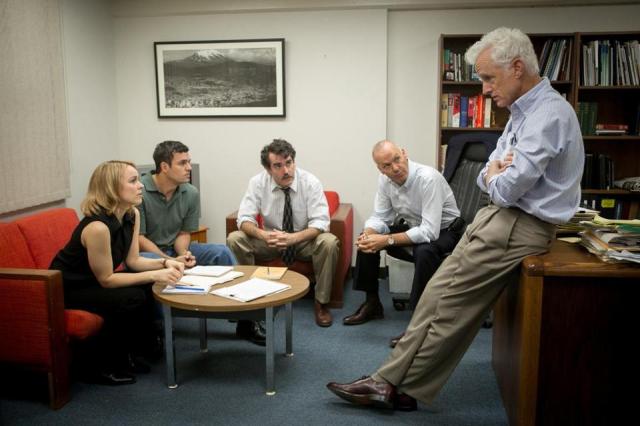 Definition of Spotlight : A lamp projecting a narrow intense beam of light onto  a place or person especially a performer on stage.

Spotlight is the perfect title for this historical drama about a group of journalist from the Boston Globe as they uncovered the clergy sex scandal.  This group had the freedom of choosing their expose topic , researching it, and then writing  pretty much on their own timeline. This  topic was a startling and brave one  as this was the beginning of the world wide  discovery of  clergy misconduct with children.  Boston was a Catholic City and most of the journalists were either Catholic or recovering Catholics.

The film has the feel of a documentary or even a play as the audience is  ever present throughout the film. It is as All the President’s Men , a film of digging for the truth, and old fashioned journalist of interviews, walking the streets, and knocking on doors.

Since I really enjoy getting to know characters, I would have liked to have liked  more information about the characters and their histories, especially faith and family,  but  this is a film completely dedicated to focus on the systemic cover-up of pedophilia, and very well done.

The overarching theme, it seemed to me, was that  we are complicit in evil   if we know, yet remain silent.  It is thought provoking.