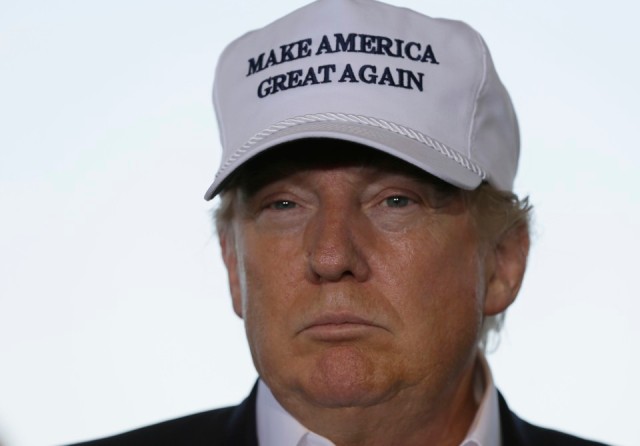 Most people would agree that our family life and birth order  affect  us either pro or con in our self-confidence, success in life, and choices in life.  The need for parental love and acceptance also is very important for self-worth.  This article seems to explain pretty clearly the history of Donald Trump and sometimes  why he is like he is from the family like experiences.   Even as many in the country shake our heads  in disbelief at his words,  this article may  give you an” aha”  moment  of clarity.

For Donald Trump, Lessons From a Brother’s Suffering
By JASON HOROWITZJAN. 2, 2016
Photo

The Trump siblings — from left, Robert, Elizabeth, Freddy, Donald and Maryanne — in an undated photo. Freddy Trump, who died in 1981, was eight years older than Donald. Credit via Donald Trump campaign
Advertisement

One evening in the 1960s, Donald J. Trump, still in college but eager to make it big, met his older brother, Freddy, for dinner in a Queens apartment complex built by their father.

As Freddy, a fun-loving airline pilot with a gift for imitating W. C. Fields, joked with his best friend at the table, his younger brother grew impatient. Grow up, get serious and make something of yourself in the family business, Donald scolded.

“Donald put Freddy down quite a bit,” said Annamaria Schifano, then the girlfriend of Freddy’s best friend, who was at the dinner and recalled Donald’s tendency to pick fights and storm out. “There was a lot of combustion.”

For Mr. Trump, a presidential candidate whose appeal is predicated on an aura of toughness, personal achievement and perpetual success, the story of Freddy, a handsome, gregarious and self-destructive figure who died as an alcoholic in 1981 at the age of 43, is bleak and seldom told.

Donald J. Trump with his older sister, Maryanne Trump Barry, in Scotland in 2008.Familiar Talk on Women, From an Unfamiliar TrumpAUG. 18, 2015

Donald J. Trump’s childhood home in the wealthy enclave of Jamaica Estates, Queens.Donald Trump’s Old Queens Neighborhood Contrasts With the Diverse Area Around ItSEPT. 22, 2015
George Bush with his son Jeb during a Florida G.O.P. fundraiser in Tampa, Fla., in 1994.Presidential Candidates Tell the Story of Their Fathers From the StumpJUNE 21, 2015
In a telephone interview last week, Mr. Trump said he had learned by watching his brother how bad choices could drag down even those who seemed destined to rise. Seeing his brother suffering led him to avoid ever trying alcohol or cigarettes, he said.

But the painful case of Freddy Trump, eight years his brother’s senior and once the heir apparent to their father’s real estate empire, also serves as an example of the dangers of failing to conform in a family dominated by a driven, perfectionist patriarch and an aggressive younger brother. In the upwardly mobile Trump family, Donald was the second and favorite son, the one who got into the University of Pennsylvania’s Wharton School, relished the combat of New York real estate and ultimately made the Trump name an international brand. Freddy was the disappointment, who lacked the killer instinct and drifted so far from his father’s ambitions that his children were largely cut out of the patriarch’s will.

Asked whether Freddy’s experience in the family business, which friends described as miserable, contributed to the drinking that ultimately killed him, Mr. Trump said: “I hope not. I hope not.”

From the beginning, Freddy stood out as different from his authoritarian, workaholic father. As Fred Sr. became one of the master builders of the New York boroughs, his mischievous son drank Cokes, and eventually beers, with friends in the family recreation room. Less quick-witted than his older sister, Maryanne Trump Barry, now a federal judge, he was also more welcoming of outsiders than his father.

When Ms. Schifano moved to Jamaica Estates, Queens, the wealthy enclave where the Trumps lived, Freddy confided to her that his parents had panicked because, as Italians, the Schifanos were “the first ethnic family to move into the neighborhood.” But Freddy was less concerned with ethnic distinctions. When he enrolled at Lehigh University in Pennsylvania, the boy with blond hair who had attended an Episcopalian boys’ preparatory school on Long Island joined a Jewish fraternity.

“It may have been Freddy’s first attempt to make his own statement to his father,” said his best friend at Lehigh, Bruce Turry, who, like several other former fraternity brothers, remembered Freddy claiming that his father, the son of German immigrants, was Jewish. (He was not.) “Freddy was a classic illustration of someone who had a father complex.”

The Jewish fraternity brothers kidded Freddy about his middle name, Christ. He found the ribbing, like much else in life, hysterical.

In his junior year, he and Mr. Turry called themselves the “mysterious two” and went through the fraternity house short-sheeting beds. But Freddy was also generous to his fraternity brothers.

He gave Mr. Turry, who was saving to buy his girlfriend an engagement ring, a stock tip and left notes for him about his improving investment. “Your eighth of a carat is up to a quarter-carat,” he wrote.

It eventually became apparent to his fraternity brothers that Freddy, who wore Brooks Brothers clothes that draped his thin frame, was wealthy. He drove a Corvette and owned a Century speedboat. Sometimes he would take his little brother Donald, then a student at an upstate military academy, onboard for summer fishing expeditions off Long Island.

“I hope you don’t mind, I have to take my pain-in-the-ass brother Donald along,” another fraternity brother, Stuart Oltchick, recalled him saying.

At the time, Donald looked up to his brother and kept a photograph of him, standing next to an airplane, in his dorm room at military school. But he also looked toward a future without him in the way. According to “The Trumps: Three Generations That Built an Empire,” by Gwenda Blair, Donald told his roommate that Freddy’s decision to be a pilot rather than run the family business had cleared a path for him to succeed his father.

Freddy developed his passion for aviation at Lehigh’s flying club, where he flew under electrical lines and raced storms home. But as his 1960 graduation neared, his father began building Trump Village, an enormous development on Coney Island and the first to bear the family name. Freddy was eager to make his mark.

“He was going to make the Trump name known,” as his father dreamed, Mr. Turry said. “We were going to live in one of his father’s apartments and have a ringside seat at the Copacabana.”

It didn’t work out. While working on Trump Village, Freddy was berated by his father for installing expensive new windows instead of repairing old ones. Mr. Trump said that their father “could be unyielding,” and that Freddy had struggled with his abundant criticism and stinginess with praise.

“For me, it worked very well,” Mr. Trump said. “For Fred, it wasn’t something that was going to work.”

Mr. Oltchick said Freddy had “complained that he didn’t get his appreciation.”

.Freddy left real estate to pursue his passion for flying, working for Trans World Airlines, which gave him some good years. In 1962, at age 23, he married Linda Clapp, a stewardess. They had two children, whom they named Fred and Mary, after Freddy’s parents. The family settled in Queens and spent free time with Freddy’s childhood best friend, William Drake, also a pilot, and his wife, Ms. Schifano.

The couples went deep-sea fishing and ate clams on the half shell. Once, when they spotted a Soviet trawler in international waters off the coast of Montauk, Freddy circled it as his friends jeered, “Do svidaniya!” — Russian for “goodbye.”

But as he reached his mid-20s, he began drinking heavily. And Donald, then in college, did not approve, haranguing his older brother about wasting his time on frivolous pursuits and telling him to come back to real estate.

“I was too young; I didn’t realize,” he said. “Now I give speeches on success, and I tell people, ‘You’ve got to love what you’re doing.’ ”

Mr. Trump said he had eventually come to recognize that his brother was a talented pilot and belonged in the clouds, not amid bricks and mortar. But by the time Donald had graduated from college in 1968 and had begun ascending at Trump headquarters on Coney Island, Freddy’s drinking was out of control.

Ms. Schifano recalled that the last time she saw Freddy, one night in the late 1960s, he looked gaunt. Even though she prepared his favorite food, roast beef, he barely ate.

The years that followed were unkind. He got divorced, quit flying because he knew his drinking presented a danger and failed at commercial fishing in Florida. By the late 1970s, he was living back in his parents’ house in Jamaica Estates, working on one of his father’s maintenance crews.

By then, Donald had broken into the Manhattan real estate market and the city’s celebrity culture. A younger brother, Robert, had followed in Donald’s footsteps, joining the family company and eventually becoming a top executive there.

In 1977, Donald asked Freddy to be the best man at his first wedding, to the Czech model Ivana Winklmayr, an honor Donald said he hoped would be “a good thing for him.” But the drinking continued, and four years later, Freddy was dead.

Over the next decades, Donald put the Trump name on skyscrapers, casinos and planes.

In 1999, the family patriarch died, and 650 people, including many real estate executives and politicians, crowded his funeral at Marble Collegiate Church on Fifth Avenue.

But the drama was hardly put to rest. Freddy’s son, Fred III, spoke at the funeral, and that night, his wife went into labor with their son, who developed seizures that led to cerebral palsy. The Trump family promised that it would take care of the medical bills.

Then came the unveiling of Fred Sr.’s will, which Donald had helped draft. It divided the bulk of the inheritance, at least $20 million, among his children and their descendants, “other than my son Fred C. Trump Jr.”

Freddy’s children sued, claiming that an earlier version of the will had entitled them to their father’s share of the estate, but that Donald and his siblings had used “undue influence” over their grandfather, who had dementia, to cut them out.

“I was angry because they sued,” he explained during last week’s interview. At the time, he attributed their exclusion from the will to his father’s “tremendous dislike” for Freddy’s ex-wife, Linda. She and Fred III declined to comment on the dispute.

Mr. Trump said that the litigation had been settled “very amicably” and that he was fond of Fred III, who works in real estate, though not for the Trump organization. He also said that, at 69, he had grown to appreciate his brother’s free spirit.

“He would have been an amazing peacemaker if he didn’t have the problem, because everybody loved him,” he said. “He’s like the opposite of me.”