Posted on September 1, 2015 by annetbell

My husband has one of those BIG birthdays on September 6th.  I won’t be specific but these  either end in a 5 or a 0!   Our children, Katherine and Christian planned a day at Cooperstown, New York , at the Baseball Hall of Fame. David loves baseball and we hadn’t been there for quite some time. The girls were on our best behavior for Bofa’s day, determined not to make snarky remarks about “the game!” 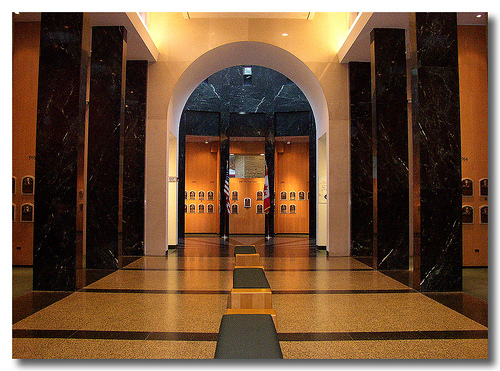 The cathedral celebrating the “Boys of Spring!”

These are google public domain pictures. Actually the Hall of Fame was crowded with visitors finding and reading about their favorite players.

One funny family story. . . . on either the second or the third floor, there is a maze of famous players and their memorabilia.  Once you are in the maze you have to walk by all the players to find your way out at the entrance again.  Violet, the 5 year old had been walking around  with her giant purse that she had borrowed from her mom.  As she came to where she thought the exit should be, she was met by another baseball display!   Her Dad was nearby when she slammed down her large black patent leather purse on the floor and announced in a very loud voice. . . . “There is no way to get out of HERE!”  Some of us knew just how she felt , and we had a great laugh.

We had a great lunch down by the lake. .  .another of the spectacular Central New York lakes.  Afterwards we strolled up and down Main Street which is full of memorabilia. . . . baseball of course. .  . cards, hats, t-shirts, bats and  things beyond imagination !

In in all honesty had a lovely day.  That happens no matter where we are but all together with the kids having fun and laughter and talking  with  the adults.  We will be back because each family joined the BHF because it was quite reasonable compared to single day admission.   We shall return. . . .all those Bell Oriole fans. .. . even the reluctant ones!

Before I leave you, here is one of the most popular displays, a TV with Abbott and Costello  doing  their  routine of “Who’s On First?” It has been voted the funniest comedy routine in the last century. . . . well worth the watching!

Any of you visited Cooperstown or other sport’s museum?  What is your favorite sport?