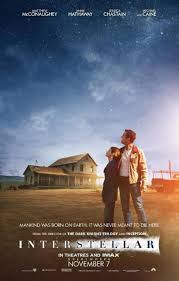 Well, today was a definite first for me.  I saw a geeky science fiction space travel movie and I loved it!   Now I am not one who has a fascination with stars, planets, galaxies, or space  exploration.   That would be David, my husband,whom I might add had two years towards a PhD in theoretical physics before changing careers to architecture. He not only is interested in space , but he knows a lot.  My interest in the heavens  is the spirttual side of curiosity, frailty of humans, and the turning of  human hearts when life on earth is challenging .  For me,  heaven is sought out when man feels the need for grace, hope, salvation, and escape.  In “Interstellar”  escape is needed from an unsustainable earth. . . . after droughts, sand storms, and a mysterious blight making food production impossible.

The timing for the film  when  NASA has so drastically cut budgets is ironic  where the film is  considering man’s place on earth and the celestial spheres. Another aside is the gorgeous, booming organ score which made this a nearly 3 hours church service in the cathedral of space.

This quote is used several times to reiterate the theme of survival which is woven throughout the film. But for me, deep emotional bond was the heart of the film. Coop  ( Matthew McConaughey) was strong yet vulnerable as he looked for a new home for humanity as well as the deep bond he shared with his daughter.

David was excited to see that a theoretical physicist was a script consultant. David said the current scientific thought on gravity which was determined by a woman scientist was presented in the film as well other  correct scientific details as in electrical magnetism.  For me it was that love was set on equal plain  with the science. . . . . pure and  powerful emotion. For me the science fiction  film was just the setting  for an emotional tale of family, survival, journey, death and love.  This is quite remarkable that two so different people should be entertained by  one film. It rarely happens, trust me !

I wept throughout the film, ( which is best seen on I MAX to experience) it and not just see the spectacular special effects.  This means I really connected with the whole experience.  I love to cry in films!   David, too, was sniffling by the end and that is quite an accomplishment for any film!

Anybody else see “Interstellar” on this its opening weekend?

6 Responses to “Interstellar”, the film