What is a haboob?  It is  derived from the Sudan,  and is an Arabic word meaning violent wind  storm.  There are three places on the planet that experience haboobs, Sahara Desert, parts of the Middle East , and Arizona.   Monsoon winds and rains come to Arizona  from June 15- September 30.

In a large haboob, the wall of dust blown up by the howling over 60 MPH  winds can be hundreds of feet high. Last week in the Phoenix area there was a very large haboob. They always make the national news.

Flights were canceled causing flying delays  all over the country, power was knocked out, and many swimming pools became mud pits!

I was caught in a haboob when I live in the Phoenix area and my car was covered  in mud like this one after  I drove through the sand, and rain!  I had no idea what was going on at the time!

This video was taken in Gilbert Arizona and I chose it from the ones listed on YouTube because the neighborhood looks identical to my son’s.  But come to think of it, it looks like lots of neighborhoods in Gilbert and other Phoenix bedroom communities in the Valley of the Sun ! 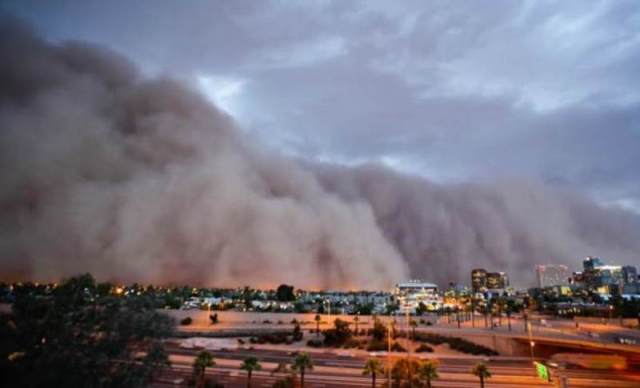 Have you heard of this weather phenomenon?  Have you seen or witnessed  a haboob or other large storm ?