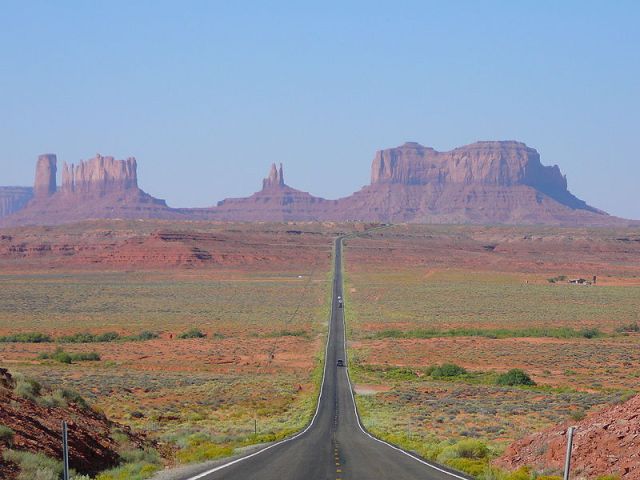 This is Monument Valley, the Navajo (Native American) Tribal Park  located  on the Arizona/Utah border. The clusters of vast red sandstone buttes (large stone structures with flat tops) are near the famous 4 corners. ( This is where Arizona, Utah, New Mexico , Colorado  and the tribal nation of the Navajo meet.)

Many car commercials have been shot in Monument Valley  during the years and the famous director, John Ford has shot many western movies staring John Wayne on this “set.” In fact, it has been said that movie goers  of the past have imagined the 5 square miles of Monument Valley as the totality of the American West.

We have been to the park several times on our exploration of Arizona. The Navajos are not concerned with large fees as it is  five dollars per car for the  7 mile, self-guided ride through the park that takes about 2-3 hours to complete.( Compare this to $100 per person, per day at Disneyland!)  People would gladly pay  more to see the rock formations,  but capitalism is not a concern to the Navajos.

Our favorite place to stay is a new hotel built on the ridge overlooking the valley. It is designed , built, and owned by the Navajos and is the perfect location to view the sunset late in the day or the sunrise from  the large windows in each room, overlooking the buttes in the morning.  There are some  very pricey rooms complete with skylights for star gazing at night, but we didn’t stay in one of those. Make a reservation as there won’t be room at the end of the day on a whim.

It looks like it has grown from the rocks in the late afternoon sun.

Night falls in the valley.

My architect calls this “sky blue-pink,” his favorite color, seen only at the beginning of the day.

There are a couple of sites accessible only with a Navajo guide.  On one visit, we went on a sunset tour in a well-worn Jeep.  We were able to  see some ancient glyphs or stone carved  story writing.( Hieroglyphs are particular glyps found only in Egypt.)   This is Kokopelli , the Native American  hunched-backed flute playing, fertility god.

The highlight for us was standing under a natural stone dome, seeing, and listening to a Navajo playing a flute. Of course, it was all staged but it didn’t change the sight of  the shadows of  last light of the setting sun, and the ethereal notes colliding with the stone dome and filling  the canyon with the musical story of both peace and anguish.

Leaving the park for the day, you might catch a glimpse of a  lone cowboy and his horse enjoying the tranquility of Monument Valley before  riding off into sunset.