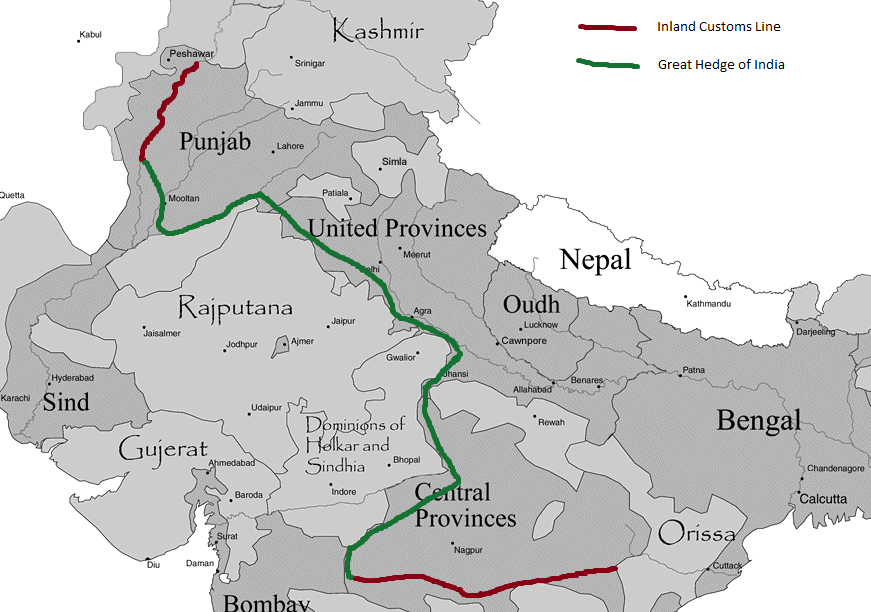 My friend Page forwarded this article from the Washington Post. Walls or ” the wall”  are so prominently in the news making this a most topical article. Gandhi’s march to the sea is mentioned and I have seen pictures in the Gandhi Ashram in Ahmedabad in Gujarat (map)  where I spent a majority of my time in India. Gandhi lived and planned his strategy of nonviolent protest   in this peaceful place. Humans are territorial creatures and need barriers to define their turf, identify with their tribe and feel safe. History and the landscape are littered with examples of such obstructions, from medieval walled cities to the sinuous and fortified Great Wall of China.

Life in communist East Berlin was so divine that they had to build a wall to keep all those westerners out. I once built a dry stacked garden wall, which I called Adrian’s Wall. It did not become a tourist attraction.

One of the most bizarre human barriers in history was the Great Hedge of India, a living stockade that at its peak was reputed to have run more than a thousand miles from what is now Pakistan to south-central India. It existed for about half the 19th century, reaching its zenith in the 1870s.

It has all but vanished from the Earth, and perhaps its true scale and presence may never be known. Author Roy Moxham spent several years in the late 1990s trying to establish its existence and then to trace vestiges of this oddity. His personal odyssey is recounted in “The Great Hedge of India,” published in 2001.

The hedge ran along what the British authorities in India called the Inland Customs Line, which would snake 2,500 miles from the foothills of the Himalayas to close to the Bay of Bengal. It would be easy to think that a hedge of sub-continental proportions was a stroke of English horticultural and colonial eccentricity. But its purpose was not benign.

The hedge, Moxham writes, was created by the British East India Co. — the de facto colonial power in India — to prevent smugglers from crossing into Bengal. The contraband in question wasn’t opium or hashish or arms. It was salt, a basic requirement for a healthful diet. The East India Co. and, later, the British state, imposed a hefty tax on salt and thus needed to control its supply and movement, indifferent to the suffering this caused among’s India’s poor. “It had been a shock to find that the great hedge was in reality a monstrosity; a terrible instrument of British oppression,” Moxham writes.

Long after the hedge had gone, the salt tax remained; Mahatma Gandhifamously led a protest against it, saying its abolition was “for me one step, the first step, towards full freedom.”

Can a hedge be a true barrier? I remember taking my then-young children to a maze in an English garden and finding that they had found gaps in it to pass from one corridor to the next. This was annoying; how can you expect to get frightfully trapped in a maze if you don’t play by the rules?

But this was an old yew hedge with holes. The barrier plants used in India were of much angrier species. In addition, the hedgerow was peppered with hundreds of guard posts and patrolled by thousands of sentries.

Moxham described its perfected sections as up to 14 feet high, 12 feet wide and planted with such tropical trees and shrubs as carissa, acacia and the common jujube, each with nasty thorns.

The Great Hedge was evidently difficult to maintain because it wound its way through different soils, climates and elevations. Large sections were of dead material with absurd maintenance needs.

Each mile of “dry hedge” required a ton of brush, staked. A tax commissioner wrote in 1868 that with fires, decay, storms and destructive ants, “at least half has to be renewed yearly.”

Most of the Great Hedge had vanished by the time Moxham began looking for it, even though hedges can live for hundreds of years. I remember being in a Dutch tulip field that was edged in beech tree cordons that had been planted back when windmills were leading-edge technology.

Moxham, who lives in central London, told me by phone that it’s remarkable that the hedge “was so forgotten in such a short time.” The sentry path alongside the hedge became a convenient route for subsequent highways that obliterated much of it, he said.

The book ends with his discovery of one of the last vestiges of the hedge in a village downriver from Agra named Palighar. The locals led him to an embankment where the customs line had run. Clusters of acacias rose 20 feet, and thorny Indian plum trees grew nearby. “It was impossible to tell whether the trees were original or re-seedings,” wrote Moxham. “Whichever they were, it was the Customs Hedge.”

I find it satisfying that such a malevolent hedge has faded away, but what of garden hedges?

I have come to admire well-grown hedges, which might be sorted into two basic types. The first form naturally tidy, compact but unclipped screens of trees or shrubs. Evergreen candidates include red cedars, laurels, Chindo viburnums, Japanese cedars and upright yews. Deciduous plants are effective, too: Upright hornbeams, hophornbeams, amelanchiers and even hydrangeas do the job. Scale and relationship to space are critical to success.

Hedges that are sheared into geometric shapes require even more careful thought. The individual plants are typically planted close together and then shaped from an early age. They can look elegant in small urban gardens, green but architectural. Looks-wise, they can be too high and pretentious, or too rigid in an otherwise natural garden. The issues of cultivation loom larger. Success begins with the choice of plant and the knowledge that in hot, humid climates, the options are limited because of the extra stresses clipping puts on shrubs. The classic example is boxwood. When sheared, the growth becomes congested at the surface and impedes the type of air circulation and light penetration you need to reduce fungal diseases. If I were planting a clipped hedge in Washington, I would select such fine-textured evergreens as the yaupon or Nellie R. Stevens hollies, holly tea-olive (Osmanthus heterophyllus) or the southern wax-myrtle.

Clipped hedges require effort and some skill to keep their appeal with a careful shearing at least once a year. Such hedges have fallen from favor but need a revival. Hedges as instruments of oppression deserve to perish, but those made and sustained with love are bound to succeed.