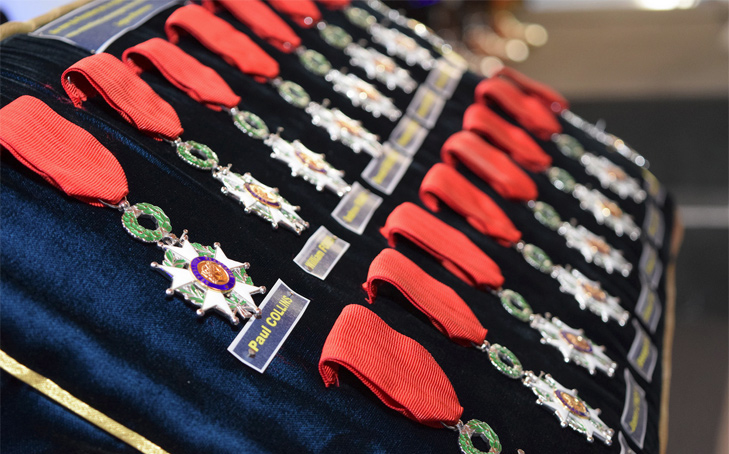 The French government awards this highest French order of merit to living  Americans who fought in Normandy or the Rhineland.  Napoleon Bonaparte created the medal and award.   Two French officials flew from Paris  flew to be  in  Conneaut to award three medals this year. Some of the men are wheelchair bound and  others in remarkable shape though  they are all in their 90’s .  Most of them were hugging and posing for pictures with the lovely young girls dressed in styles from the 40s. It is an interesting question whether that is their usual behavior or if the uniforms, though threadbare, give  them the courage to hugs the girls!

The medal ceremony was very touching with not a  dry eye. I was thinking of the life and approaching end of life of each dear man. There was  a time during the  following hour for 7 of the veterans  to tell  stories from the war.  I am so glad these are being recorded  as there are fewer and fewer  veterans  each  year.

The thoughts I took away were  how young they were, 17, 18 , 19 when they joined the fight.  My brother George was killed when he was 20 . Just  as my family always says that George was an normal American boy who saw his duty,  these veterans had  been ordinary  boys answering  their country  without much understanding of what the war was  all about.  Loving their country and doing their duty lead their decision.

Today and forever they will always be our Greatest Generation! God bless them.