On Sunday, David and I drove to New Haven to see  Joey Fala’s  senior organ performance for his Master’s Degree. We had a delicious lunch at Tarry Inn on Park Street with extraordinary Italian cuisine and happy banter with  Joey, Kathy, his first organ teacher from Hawaii, and Gary another organist in the Troy area.  We planned to leave immediately after the recital because of an early morning class David had to teach on Monday morning, so dinner was not an option.

The campus of Yale is amazing.  It was my first time there and we both thought it is more impressive than even Harvard.  Yale is nestled into the city fabric with parts of the old campus surrounded by wrought iron and period architecture. I have no idea what the relationship with the city is,  but imagine it is the usual suspicion of   “town and gown” in most university towns.  The appearance, though,  is one of integration

We had only time for a brief visit to the British Museum designed by Luis Kahn. He is an architect we both enjoy.  My favorite art is Italian and other art rarely meets that standard.  I did love the Long Hall with floor to ceiling paintings in a dramatic “Long Hall.”  each space had skylights for natural light.  Kahn worked his magic at Yale.  His theory of design was to “ask the bricks what they wanted to be!! This creative unorthodox design theory often needed tweaking by more practical architects. When Kahn was in India designing IIM, a spectacular campus, Doshi had to point out that the orientation needed to be changed to avoid the boiling afternoon sun. 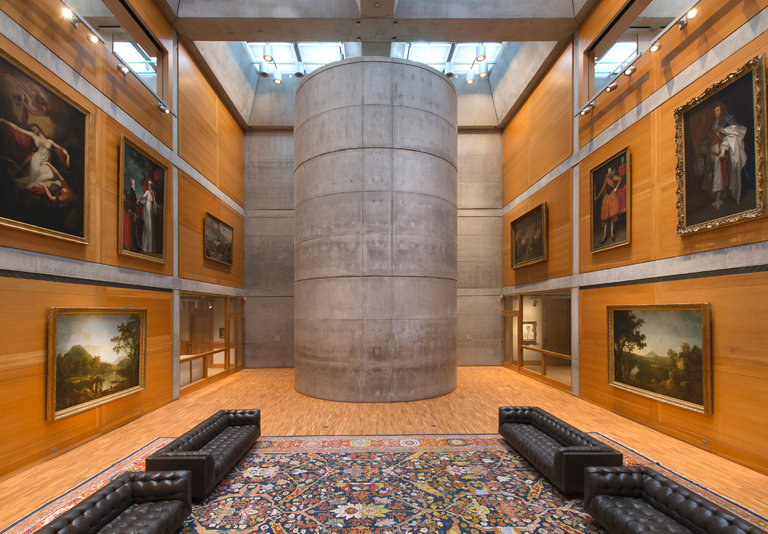 The British Museum at Yale.

After walking 7000+ steps, nearly 4 miles, we sat in the car waiting for the 7:30 recital. It is not yet on Youtube, but there is a piece played by Joey at an another concert on my previous, included, post. ( See link below the final image.)  I will post his hour-long recital when it is available.

Here are images of Woosley Hall where there are 2500 seats for various events.   Joey told us that people sit only in the back balcony of the hall for organ recitals to hear the most perfect acoustics.

For one hour on February 05, 2017, Joey Fala and The Newberry Memorial Organ made music as one.  The program was varied and dramatic from jubilant to haunting.  This Orchestral Organ absolutely has tones and sounds of the orchestra and volume to fill this giant hall.  No matter the perfection of the instrument, the organist makes it happen. Joey Fala was the man of the hour and played with perfection.

In the last three years, Joey Fala has or will have completed two degrees in Architecture including  a Master’s Degree in Lighting from Rennessalaer and in May a Master’s in Music in Organ Performance from Yale.

What are his plans for the future?  He was uncertain or vague when I asked at lunch. There are lots of possibilities and I am sure his hard work, humility, and talent will open many doors for Joey on his life journey. There is no doubt that he will continue to inspire and bless many people along the way.

Thanks for the memories and God speed, Joey.  You are a National Treasure!

2 Responses to A National Treasure