This is a gas chamber in Auschwitz where gas tablets were dropped through the ceiling exterminating  up to 6,000 Jewish souls each day.  This was the largest work camp of the Third Reich  and located in Poland. The Germans built the majority of the Death Camps outside of Germany to hide them from the German people.

The sign over the gate says, Work Shall Set You Free. 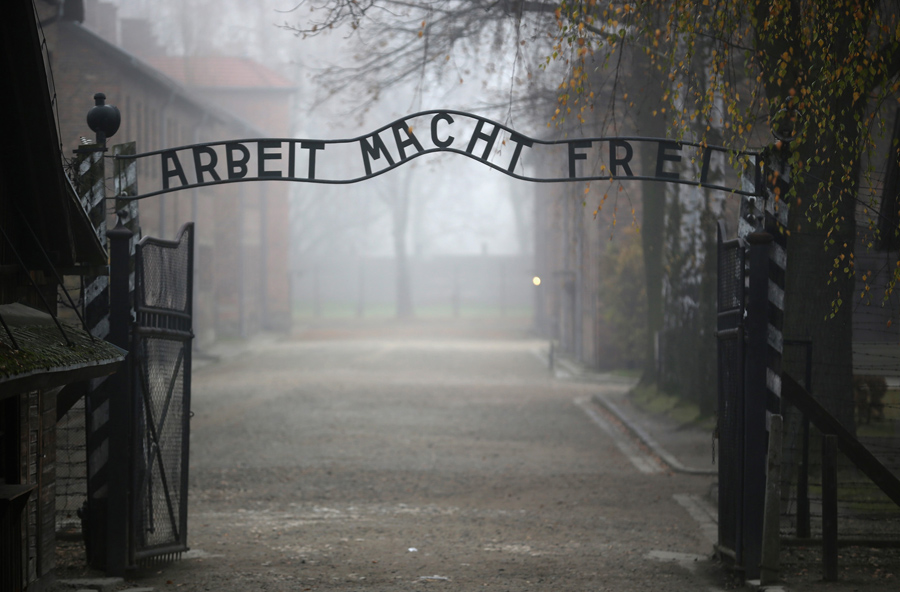 When university professor Deborah E. Lipstadt includes World War II historian David Irving in a book about Holocaust deniers, Irving accuses her of libel and sparks a legal battle for historical truth. With the burden of proof placed on the accused, ( In the UK  the defeadent  has to prove his/her innocents, the opposite of the American legal system.  Lipstadt and her legal team fight to prove the essential truth that the Holocaust occurred. Based on the book “History on Trial: My Day in Court with a Holocaust Denier.”

This is a BBC produced and filmed production. It has no car chases or explosions. It is  thoughtfully written and acted script set  an London courtroom.  The  shots of the visitation to Auschwitz  are  black and white and viewed through the fog.  It is especially topical now with so many people on Face Book  “denying”  the existence of the  Holocaust.  This bent of  rewriting history  is” raising its evil head “all over the world.  Why is that so ?  Because of lack of exposure of history in the schools?  Denial?   Following the crowd?

Here  is a video of a survivor of Auschwitz where I have not visited.  We did go to Dachau near Munich. It was the first concentration camp established by the Nazis.  Jewish people were used to work  in the work camp and also subjected to medical experimentation. It was not officially a “Death Camp” but many Jewish people lost their lives figuratively and literally even if there were not gas chambers.

For me, being in Dachau, and  at the Slave Trade Forts in Ghana, and walking Normandy beaches  all three where death, pain, suffering beyond belief permeated the air.   Dachau had the same welcoming, ironic sign over the gate. . . Work Will Set You Free” as did Auschwitz.  As we walked into the grounds, there was a large stone table with groups of rocks piled on the top.  We learned it is a Jewish tradition to live rocks when visiting a the grave of a loved one.  David and I both wept as we left rocks above the engraved table.

I am a retired elementary teacher, well seasoned world traveler,new blogger, grandmother, and a new enthusiastic discoverer of the wonderfully complex country of India. Anne
View all posts by annetbell →
This entry was posted in Architecture, Religions of the World, Travel, Uncategorized and tagged "The Denial" a film, Auschwitz, Dachau, Death Camps, Germany, Holocaust Denials, How to prove the historicity of the holocaust., movie, Poland, The Holocaust. Bookmark the permalink.