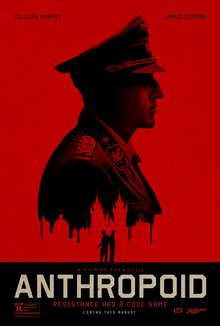 I love  historical films.  David always teases me about  the period pieces I want to see and I was surprised that he wanted to see this film.  I always want to see the World War II , Nazi films and he usually says that he  already knows the story!   So why did he  suggest we go to see this last Saturday?  It was set  and filmed in Prague!   Ah beautiful Prague. . . . . .

Hitler had begun his  plan of domination of all of Europe in 1939 when his troops invaded and occupied what is now the Czech Republic without any push back by the Czechs.  The Germans said they were coming to Bavaria to protect Germans living there but it became obvious they wanted and needed the resources to wage war starting the next year with the invasion  of Poland, coal, steel, iron, and electric power.  Later this area became part of the Communist domain until the Velvet Revolution , again without shots being fired in 1939, finally returning freedom to the Czechs. 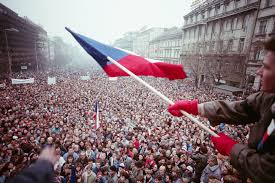 There was a dark and evil time in Prague during WW II. The German commandant was Reinhard Heydrich whose nickname was “The Butcher of Prague.” His cruelty and dark and evil heart had made him devise and then be assigned to the “Final Solution” of the wiping the Jewish people off the face of the earth.   This is the background of the film.  There is a plot to assassinate  Heydrich by a small group of brave Czech resistance soldiers.

We went mainly to see shots of Prague, the Castle, Charles Bridge, Old Town, St. Vitus, Wenceslas Square  and our only complaint was that there  were too few sites included!  If you go to or rent this film, you will see Prague, and  the details that are  true to the period with hairstyles, clothes, street scenes, and items of war.  This is a war film and there is a violent assassination attempt, a man hunt, and siege of a church  with pyrotechnics equal to  most current action films.  And it all is with  1940s  weapons.

This film does not glorify war, quite the contrary.  It glorifies bravery, love for country, and   willingness to die so others can be free.  It glorifies unselfish heroes.