Today was another long driving day , from St. Joseph, Missouri to Wall, South Dakota, ten hours to be exact.  With no internet, entertaining myself on the phone was limited,  so I turned to telling you some of the sights from my window along the way. All the states we have passed through from Mississippi to South Dakota are flat and very agricultural.  As we crossed the bridge over the Mighty Mississippi,  the state line was in the middle of the bridge when we entered Louisiana.  As we drove through the low planted fields of the state, I noticed hills to the edge and thought they might be burial mounds of the First Americans. David reminded me that the Mississippi River was just over the  hills and the mounds were actually levees or dikes to protect the land from floods.

Fireworks seem to be available everywhere we have been , sold in tents or shacks with huge signs identifying their treasures. We resisted the temptation of taking some home for the kids, thinking that we didn’t want to drive all these days and miles with  them in the car.  No desire to make a car bomb !

One thing I noticed was the frequency of Adult Stores on the roadsides. I had not noticed that many before.  David thought it was for the myriad of  truck drivers.  We didn’t go in any of the shops to test the theory.

The fields flew by, rows and rows of corn, newly baled hay , and other unknown crops to this city girl with tractors and watering apparatus and other equipment. I remembered  the women doing back breaking work in the rice fields of southern India.

David was thrilled as we rolled into South Dakota and saw the speed sign that 80 was the limit. I knew he had been going pretty fast but he had tried to stay under 80 as in most places that is considered a  reckless   speed, but not in in S. D.  So of course he added the  the extra speed to make it 85! He doesn’t like me to drive because I don’t push the limit like he does.  That is fine with me as I like to see the sights. In Nebraska, we saw a cloud that literally spanned the horizon. . . . a  cloud shaped  like a long rectangular pillow hovering over the horizon. We flew right on past the World’s Only Corn Palace and resisted that once in a  lifetime treasure.

One rather judgmental sign read:  Eat you steaks, Wear your furs, Keep  your guns. . . .The American way!

I started seeing Wall Drugstore signs about 300 miles from Wall, SD.  Several people told us we should go to this crazy one block of  stores of all things westerns, photographs, cafes, and displays.  We decided to check it out. There were signs after a signs. along  the way starting at that first. Some were along the edge of the road, other larger ones from medium to large. It is impossible to miss the huge T-Rex at the  entrance.  It was fun and entertaining after a long day in the car and before we got a bite to eat.  Another great day discovering our wonderful country! 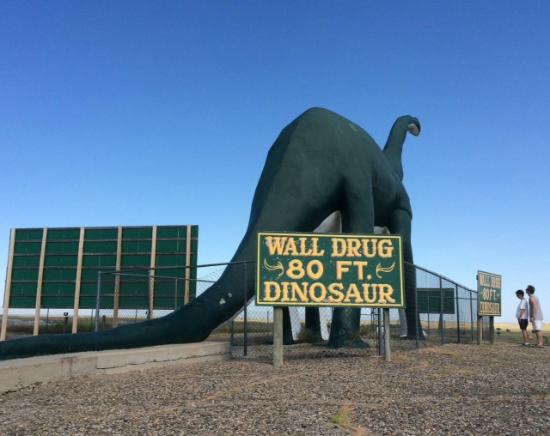