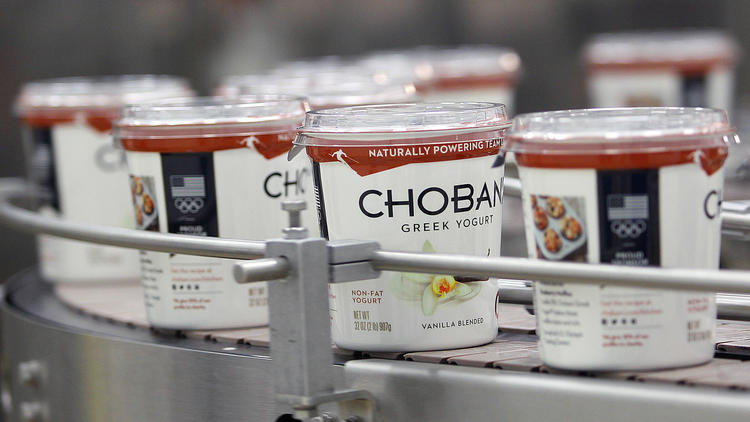 Chobani founder and Chief Executive Hamdi Ulukaya announced that he would be giving all of his 2,000 full-time workers awards that could be worth up to 10% of the privately held company’s future value if it goes public or is sold.

Greek yogurt is known for being rich in flavor and protein. Now some employees at Chobani could become rich themselves.

Founder and Chief Executive Hamdi Ulukaya announced that he would be giving all of his 2,000 full-time workers awards that could be worth up to 10% of the privately held company’s future value if it goes public or is sold. Each employee will be given “Chobani Shares” or award units, based on the workers’ tenure and role at the company, which could be converted to cash or shares in the event of an initial public offering or a sale. The value of the awards are dependent on company performance, however, and have the potential to be worth nothing if Chobani doesn’t meet performance metrics.

The New York Times, which first reported the news, said that if Chobani was valued at $3 billion, the average employee payout could be $150,000, and some long-tenured employees could see windfalls possibly worth more than $1 million. (A Chobani spokesman declined to confirm those amounts.)

Ulukaya, a Turkish immigrant who has pledged to give away half his wealth and advocated for business leaders to do more to hire refugees, announced the news to workers Tuesday. The award was not a gift but “a mutual promise to work together with a shared purpose and responsibility,” he wrote in a memo to employees. “How we built this company matters to me, but how we grow it matters even more. I want you to be a part of this growth — I want you to be the driving force of it.”

Bruce Elliott, manager of compensation and benefits for the Society for Human Resource Management, called the move highly atypical. “It’s unusual to see that in food services and manufacturing,” he said in an interview. It’s relatively common among start-ups in the tech industry, Elliott said, but it’s rare to see founders offer employees such awards at this stage of a company’s growth. Chobani was founded in 2005 and has grown rapidly. After struggling with managing a plant expansion and a 2013 recall, it reached $1.6 billion in 2015 sales, according to Euromonitor.

Some companies have shared stock grants recently beyond the executive suite — Apple, for instance, said in October that it would award restricted stock, or shares that typically vest over a period of time, not just to executives or engineers but to hourly paid workers too. And some CEOs have recently given away large personal stakes: Twitter CEO Jack Dorsey is giving one-third of his Twitter stock, or 1% of the company, “to our employee equity pool to reinvest directly in our people.”

Still, Elliott said, Chobani’s move is not something he sees as a growing trend for broader groups of employees. Although some companies share stock through employee stock ownership plans, and plenty of companies distribute shares of stock to the executive ranks, rank-and-file employees are seeing little in the way of raises or higher pay and more in benefits these days. “It’s easier to cut a benefit than it is to cut a salary,” Elliott said.

Ulukaya’s move comes before TPG Capital, which made an investment in Chobani in 2014 in the form of a $750-million loan, can buy a stake in the company, according to the New York Times’ report. The deal’s terms, according to reports from that year, included warrants that could give TPG an ownership stake of 20% or more. The award for employees would essentially dilute TPG’s potential ownership, the Times reported, although it also noted that Ulukaya said the employee award was among the initial terms of the deal.

A spokesperson said that the company’s offer to employees was “absolutely not” intended to dilute TPG’s potential stake, that the move was something Ulukaya had long wanted to do and that the decision was fully supported by the board, which includes TPG representatives. A TPG spokesperson declined to comment.

Elliott noted that the decision also means Ulukaya is diluting his own stake, and whatever the motivations, there are likely business benefits. If employees end up holding substantial equity stakes, that could lead to more natural allies among investors, preempt unionization efforts and create even more of a connection between workers and management, Elliott said. “It definitely creates an ownership culture,” he said. “It focuses not only management but employees on bottom-line and top-line figures.”

Jena McGregor writes a column analyzing leadership in the news for the Washington Post’s On Leadership section.

This is such a heartwarming story of a immigrant making good, and his generous spirit and appreciation for  his workers.  I think I can safely say that this is an “only in America” story and  very inspirational!

I am a retired elementary teacher, well seasoned world traveler,new blogger, grandmother, and a new enthusiastic discoverer of the wonderfully complex country of India. Anne
View all posts by annetbell →
This entry was posted in Travel, Uncategorized, USA and tagged 10% of company's value, business, business in America, Chobani Greek Yogurt, entrepreneurship, generosity, Hamdi Ulukaya, sharing with his workers. Bookmark the permalink.