Snakes in the South of India 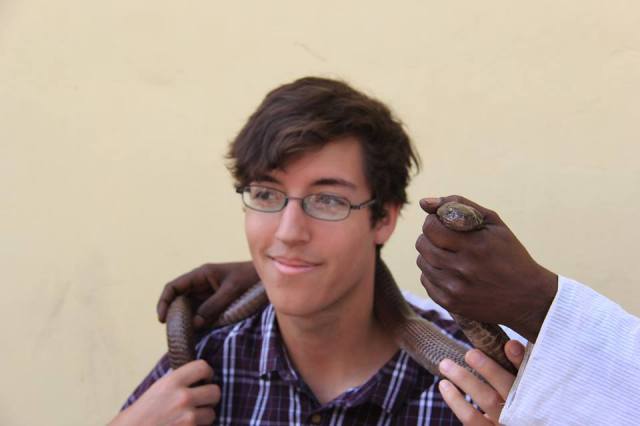 Jesse lived to tell about this photo taken, I think, in Jaipur either at the Amber Fort or Jantar Mantar.  As brave as Jesse looks with that cobra wrapped around his neck, you need to know that we were told that the poison sacks in cobras are  removed before they are used to amaze and frighten  tourists.   I have to say that there is no way I would ever have done this, photo op or not!

The video is from the south of India.  There is a clue to that  in the video besides the title.  The men and boys are wearing skirts made from a long piece of material wrapped around the waist.  This area in India is very hot a good part of the year as well as quite humid.  The skirts known as lungis are cooler.  The boys as well  as David bought at least one on our south trip in 2013. There was big talk about wearing this unusual clothing to the architecture school,  Shane might have done it  , but David never did.  Seemed like a good idea in India!

I guess I can say that men in skirts in south  India are quite brave. . . . or are they?