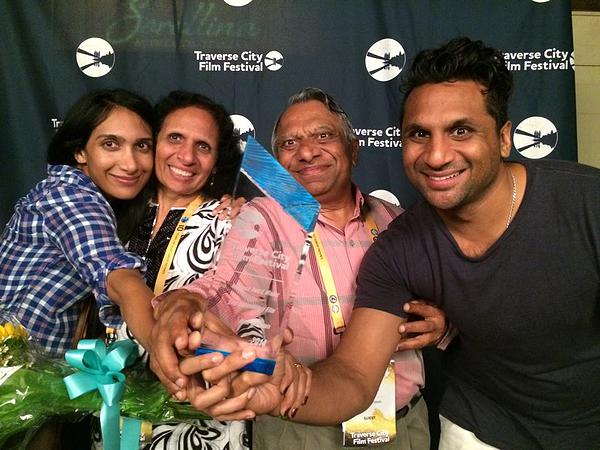 What fun this film was last night. We had finished the 10th and final episode of the first season of “Occupied” and David wanted to see some science fiction.  I found “Meet the Patels” on Netflix.  I had heard Ravi Patel on NPR being interviewed for his family/comedy documentary.  He was funny and engaging.  He was the visionary, actor/writer/director  of this charming Indian immagrant story of love and  marriage in the United States.  And the name is Patel is  the  prominent/dominate surname in Gujurat where we live in Amdavad!   There are Patels all over the world, living, working, laughing.

The documentary started off as a  family vacation  video but Ravi who is an actor/writer/director soon discovered the “gem” he had created.  He was quite funny  on NPR saying that it was his parents who enchanted the media during the publicity tour .  They loved riding around in a limousine and being interviewed.  What’s more, the media would tell Ravi. . . “”Hey, where are your parents?  We want to talk to them!”

He claimed to be most hurt that he, the creator , actor, director, producer was being ignored, but after seeing the film, it is quite evident that it was said tongue  in cheek !

This film uses animation, family love, cultural clashes,with images from India and the States to present with humor this age old  challenge of Indian  family finding the the perfect mate for their children.

This is entertaining for any movie lover  with its gentle, humorous Indian perspective but especially for anyone who had loved Gujurat, or a Patel!

4 Responses to Meet the Patels