This is Napoli in Italia and what a sight to see, not far from Vesuvius , and right on the Mediterranean.There is very high density housing and the word is that if Vesuvius erupts, it will be  “arrivederci, Napoli.”   Oh yes, when we first started taking students to Italy for a semester  there was terrible crime in the city.  The story that put us off the most was just petty thief but ever so Italian in its drama.   A tourist taking a photography of this or that amazing sight., when  out in  the distance a thief would approach and as the photographer was concentrating on the shot, grab the camera in one fell swoop and run away. I am ashamed to say, that this kept us away from Naples on many visits and to our loss.

Finally we came to the realization that there are thieves everywhere and Naples is a very interesting place and should not be missed. On my last trip to Italy with students, I rediscovered Naples, and I am glad I did. 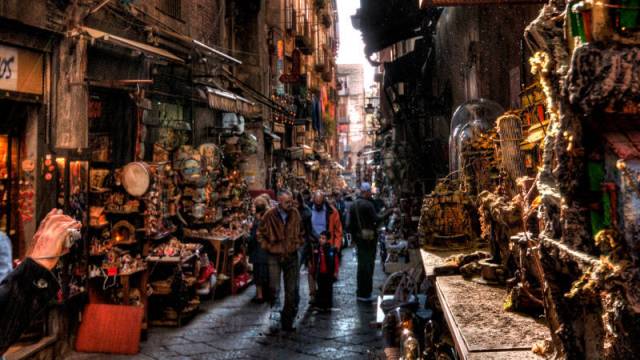 This is the San Gregorio Ameno or Street of Saint Gregory of Armenia.  Though the lovely Baroque cathedral is on this street, the crowds of shoppers are visiting shop after shop with traditional as well as unique Christmas creches. 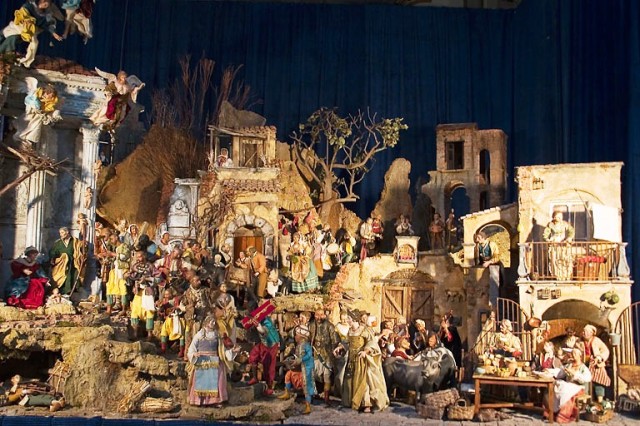 This is the traditional Neapolitan nativity scene, probably nothing that you have seen before. There is architecture from Naples, Roman columns,  the Holy Family, shepherds, wise men and towns people as well as numerous peasants.  Notice that the family is in the inn and there is no cave or barn in the scene. There are olive trees, aqueducts and even laundry hanging on the lines. At first, I was not sure if I like this tradition as mine which  was very different.  But the more I think about it, this scene of the chaos and confusion  of that long ago Christmas Eve would have been more like the scene above  rather than the neat quiet barn  I grew up with.

The shops can be overwhelming with so much color, so many displays, and so many choices.

Another choice is the unpainted  ceramic figures.

I bought my son one of these sets. . . simpler, cheaper, and there were  even columns available!   I was happy he set it up as the decorated after this  Thanksgiving for his children!

If you are in the vicinity of New York City during the Christmas holiday, pop in to the Metropolitan Museum  to see the magnificent Baroque Nativity and angel tree. . .. You guess it from Napoli !

I am a retired elementary teacher, well seasoned world traveler,new blogger, grandmother, and a new enthusiastic discoverer of the wonderfully complex country of India. Anne
View all posts by annetbell →
This entry was posted in Religions of the World, Uncategorized and tagged Baroque, Christmas, Naples Italy, San Gregorio Ameno, Street of Nativities. Bookmark the permalink.