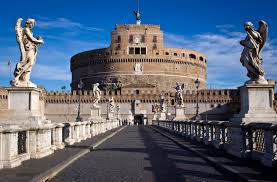 If you asked my son today, many years after our times in Roma with groups of students, he would tell you that the Castel  was and is his favorite site.  He has a picture or etching of this remarkable building  in his house.  The Romans were outstanding builders and you realize their talent when you visit building after building .  Our house in Troy was about 100 years old and we thought that was old.  The Castel was begun in 137AD and is still standing and functional. The building was originally built to be the earthly  final resting place for Emperor Hadrian and his family. Later it became a fortress  for the popes with direct secret passageway from St Peters to the Castile.  Today it is a museum.   Romans are good at adaptive reuse of her historical buildings! As much as Chris loved the  castle and the fantasies he had of playing “little boy army”  with his friends at home on this imposing site, I loved the Bernini angles which were added in the 17th century.

Bernini’s mark is large on  Rome with his beautiful architecture and sculpture and work at St Peter’s.  The professor says that Bernini was the first certifiable rock star  and he lived in the 17 Century.  He had a charming and outgoing personality and people would follow him where ever he went.   These angles were one of his last projects that he designed with his son who finished the work. 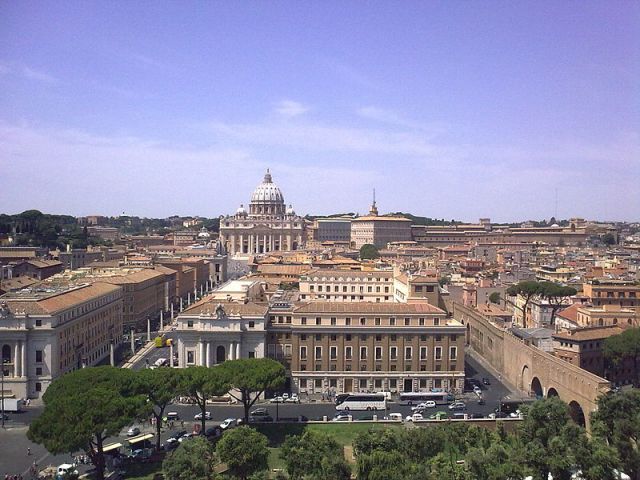 St Peter’s Dome in the distance  and the passageway on the right that connects the two sites.

Oh what a lovely visit this morning to the Eternal City !  Did you know that the title started  during ancient Rome?  They Romans though that no matter how many empires came and went in the world , that Rome would  lead  and last forever!

I would love to hear about your experiences in Roma, dear friends!