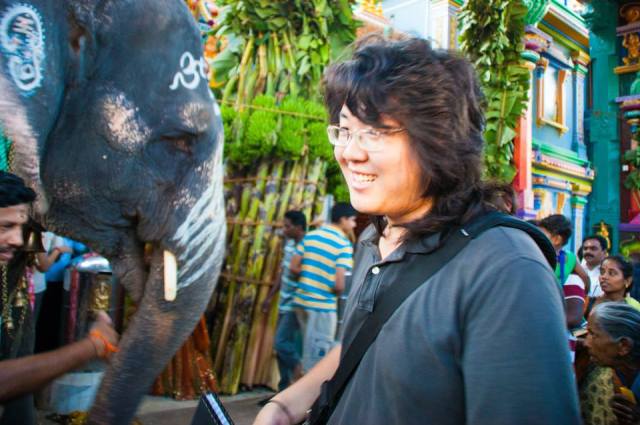 For those who always read my blog, Royd  is the photographer I wrote about and also half of the twins!   David called Jesse, the observer.  He is very quiet but observant of all that is happening. So what does that have to do with chivalry?

Well, it all began during our walks around India.  I was always at the back of the group, talking, looking, waving, speaking, or shaking hands with Indian people. David lead the way and he sets a fast pace. I first noticed Royd walking either beside me or behind me for several nights after dinner. There are not adequate street lights, the streets and sidewalks are uneven,they  often have holes and are  just a maze of traps for tripping. Royd would often turn on the flashlight so that I could see  more clearly as we walked down the unpaved lane to our hostel.   He never mentioned that he was helping me , but finally I realized what was happening. . .  Royd was my friend.  He didn’t talk much but he show me  his caring nature. with his actions.  He saw a need and just did what he could to help.

Because I loved connecting with Indian people,at times that was a problem.  When I smiled or spoke on sites such as the Amber Fort in Jai Pur, the beggars or sellers of mementos, would be relentless. I was unwilling to ignore people, always saying “No thank you” when I wasn’t interested in their wares.  So I had to put up with the cries of “Auntie, Auntie” and goods stuck in my face as ab example of my need of this or that.

One particularly persistent area of vendors, is Fatehpur Sikri which is near the Taj Mahal.  One among many lovely aspects at the Taj is that nothing is sold on the grounds, not even water. So there is no eating and or drinking  or  any kinds of  persistent sellers.  The first group might remember how persistent the children were trying to sell their wares. They would circle the students who were sketching, presumably to watch but also to try and  sell.  This group of students would ask the kids to sign their sketch books and discovered a 12 year old boy who couldn’t sign his name. He had never gone to school.  That shocked us all and was the focus of many conversations!   . . . . . .   I digress. . . . . .

Back to  Fatehpur Sikri. . . .  None of us objected to  the sellers as we walked through the secular site , but when we got to the mosque, that was another thing. This is a sacred , working mosque house of prayer.   The sellers followed us. . . me in and kept asking me to buy something.  I was becoming frazzled when my “no thank yous” seemed only to  spur on the attention.  Jesse and Royd came along beside me and never left my side until we reached the bus. They ignored the children, never said a word but were tall and silent, which seemed to get the message across!

Thank you Royd and Jesse for your kindness, your chivalry,  and showing me by your example exactly what it means to come along side someone needs help !