Last night we were invited to a dinner party with some professors of architecture as well as practicing architects.  One of the questions they asked us was what were changes we have seen in the city since our last visit in 2013.  Here is a major one.

A car, a fence, a tree?  No, the blue trash bin!   This is a great first step to begin the huge task of trash and garbage in India.  Of course, more challenges arise to get people to use  them, keep them emptied, and  recycle for the environment long term.

I have to say I have not actually seen an Indian person put something into the trash bins around the city, but I have seen evidence of them being there. Many of the bins are full to overflowing, just sitting there waiting to be pick-up.  It reminded; me of Rome with filled to overflowing trash baskets on the streets.  That was in the 1980s .  Change is hard for all of us to make it a habit.  Another encouraging people is I have seen trash trucks on our travles and in Amdavad where workers are dumping the garbage into the truck.  I have also  seen flatbed trucks where women are sorting garbage. . . cardboard into tiled piles, and bottles into a bin.  Last time I only remember trsh trucks in Chenni!

The trash and garbage problem has just been so huge, it took monumnetal government  support.  We see people throwing  paper  on the streets all the time.  I even saw a women throw some trash over the rail of the roof terrace at the hostel. But I am very encouraged, that sooner or later this problem will be solved At the Alpha One Mall which is state of the art in mall consturcion is pristine in it’s appearance.  There are continuaou sweepers and cleaners , of course giving jobs for people who need them , but also keeping the mall “new” in its appearance even after 5 years of being in operation.

Last trip I wrote the following post about the continuous sweeping !

Well some change is good as solutions to problems become clear to all.  But another aspect of this problem of trash removal is  still solved with the morning burning of leaves  in the lane where we live. 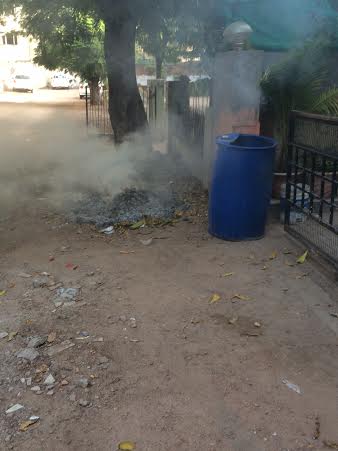 I would love to hear your thoughts!

Something else I just thought to tell you. . . . . When we go to KFC or Domino’s, we pick up our trash to put it in the binds and someone always runs over ans says “NO!”  That is his job and he wants to  do it.  With over 1 billion people, there is an effort to employ as many people as possible. I have no idea the wages. . . . may just be food.  The funniest thing we have seen along these lines is at a toll booth on the highways, there is a man on the outside of the toll window to whom you give the money and  then he hands it to the man inside with the money box!   A job!   Anyway, I mention that because Indian people are not always used to throwing away their trash!   But they are learning.  I hope another job will be  available for thes people who will be out of work! Oh, I digress. . . . . from trash removal. . . . .

2 Responses to Change in Amdavad