This the lovely Lemon Tree Hotel at the Delhi Airport.  Dbell decided we were not going to spend time in this  expensive , huge (25 million population)  city but just fly from Delhi to  Veranasi.    Delhi and Mumbai or the hubs in India. We spent the night before going to the airport for the early flight to Varanasi.

I have touched on heighten security in India.  It began after their 9/11 attack in Mumbai  both in a hotel frequented by foreigners and also the rail station on 26/11 /08.  Pakistani terrorist swam in the harbor under the cover of darkness and attacked  also a Jewish Community Center.   Just as in the US after 9/11 thoughts and actions changed.  After eight years, the scars have been removed from the buildings, all except the Jewish Center where a rabbi and his wife were killed.  The top two floors of the building still show the scars and will be left as a museum to show  the dreadful hate that is springing up for Jewish people around the world. Our guide in Agra said that the Indian  government is terrified of tourists being killed but not so much Indians.

The stage is set for fear which is all consuming. In the hotel, there was a locked gate to enter, these cones coming up from the ground to prevent  unwanted vehicles , and an x-ray  machine  just like at the airport for scanning incoming luggage of guests!   We had to show our passports to enter and be checked off a list.  Just spontaneous  guests without a reservation  would have trouble getting a room, I imagine.

The next morning ,  we went to the airport in the second largest city in the world, I learned yesterday.  There were doors with guards on the only side for domestic flights and every passenger had to show her  passport.  Cars and people were everywhere and it was 6AM. . . business travelers, I imagine were the largest per cent of travelers.  After getting inside, I had to show my passport two more times, x-ray my checked luggage then seal it  with a zip-tied  to secure the zipper. We had to stand in alphabetical order twice to make sure the tickets were in order. Then after security, we had to affix our carry-on luggage with tags stamped that they have been x-ray  checked.  One of the students didn’t have those tickets on his carry ons and had to be rechecked at the door before boarding the plane.

As much as I don’t like to fly, it was a relief getting to my seat.  I like to feel safe, and I have no intention of hurting anyone. But  I began to wonder, what is worse. . . . a society with too much safety with fewer and fewer rights or a society of less security but more rights?  My mind has changed considerably as we learn more each day of our freedoms that are lost. . . .  I am inspired by William Wallace in the last scene if  film of Brave Heart , and the words of Patrick Henry. . . . .  ” Give me  liberty  or give me death!”    These words rang out  and inspired men and women all through the colonies to to rid themselves of  the English!  They chose freedom.

I remember years ago, walking around the intact wall of Dubrovnik in what is now Croatia. A huge man came up to us, lifted our son, who was 6 years old,  high in the air  and said, “America is good, America is free!”  Would or could he say that now? 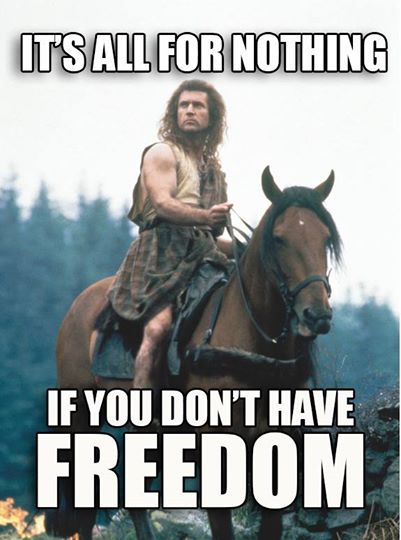 Only people in a democracy have such questions,  others live  at the mercy of their “kings” . . . . . .What do you think?

5 Responses to Hotel and Airport Security. . . . In Incredible India