A Twist on the Taj Mahal Story 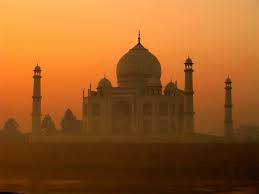 The rose color that permeates the white marble at sunrise. . .

Taj Mahal: Was India’s ‘monument to love’ built out of guilt?

Often described as one of the wonders of the world, the stunning 17th Century white marble Taj Mahal was built by Mughal emperor Shah Jahan as a mausoleum for his beloved wife Mumtaz Mahal, who died in childbirth.

But a new play which recently premiered in India gives a dramatic and unexpected twist to historical events. The production of Shah Jahan-o-Mumtaz suggests that all was not well in the lovers’ paradise and questions the motive behind the building of the Taj.

Everyone knows it as a monument to love, but could it in fact have been built out of guilt?

The play was originally written in English in the 1970s as the Tale of the Taj by Dilip Hiro, a London-based author, playwright and expert on international affairs.

“Conflict is the driving force in my script,” Mr Hiro told the BBC. And here, he explores “the conflict between the couple whose mutual love is embossed on the popular psyche”.

Mumtaz was a far-sighted political thinker, an astute strategist and schemer, and the woman behind as well as ahead of her man”

“As an Indian, one is mesmerised by the Taj. The conventional story behind it is Shah Jahan’s eternal love for Mumtaz.

“To put it bluntly, there is no drama in sentimental mush praising beauty and so on, so the play had to be about achieving the supreme power – the imperial throne.”

The play is being performed for the first time in Urdu, a language extensively used by people during Shah Jahan’s reign and still spoken and understood by large numbers of Indians today.

Not a beautiful-dutiful wife?Mumtaz was Shah Jahan’s third and favourite wife and their love story is legendary.

It is generally believed that she was a beautiful and devoted wife who was content to have lots of children with her husband – she died giving birth to their 14th child.

“But there was another side to her that’s not well-known – that she was not at all the beautiful-dutiful wife. She was a very good chess player, far better than Shah Jahan, and that she was ambitious and ruthless,” says director M Sayeed Alam of the Delhi-based theatre group Pierrot’s Troupe.

The play recreates 17th Century Delhi, buzzing with political intrigue where the fight for political power was often ugly and bloody.

It opens with the rivalry for the imperial throne between Shah Jahan and his brother Prince Pervez, and Mumtaz plays a crucial role in her husband’s victory by poisoning his rival.

As the play progresses, different shades of Mumtaz’s personality come to the fore – a devoted wife who is a guide and adviser to her husband, but at the same time with a mind of her own.

“She’s a far-sighted political thinker, an astute strategist and schemer, and the woman behind as well as ahead of her man,” Mr Alam says.

Shah Jahan cradles his dying wife after the fall

The play’s great surprise centres on a high-stakes game of chess played one evening, when a pregnant Mumtaz nudges the emperor to bet his throne. When he loses the game she ascends the throne, giving free rein to her ruthlessness and ambition.

The emperor then realises that his beloved queen must be stopped. A tussle over the royal seal ends with her fall from the throne, and soon Mumtaz dies in childbirth.

But was it a mere accident or was she pushed?

The play is open-ended – it doesn’t say in so many words that Mumtaz was killed. But it does leave one with a lingering suspicion, that perhaps the emperor did have a role in her death.

The departure from accepted historical fact certainly didn’t trouble the audience the night I went along – they gave it a standing ovation, and there have been rave reviews.

“The play focuses on the politician in Mumtaz rather than the lover boy in Shah Jahan,” The Hindu said, describing it as a “great idea”. The Deccan Herald welcomed the fact that “what has been etched in our memories” had been questioned and the audience challenged to look at events from a female perspective.

So, as some critics are asking – is the Taj Mahal truly “a monument to murder”?

Well, it really is a work of fiction – there is no suggestion in history that she could have been murdered. Mr Hiro says it is actually “faction” – where “fiction blends ingeniously with facts” to create interesting drama.

This is a definite twist on the greatest love story every told!  I know that the queens of this period did have much power given to them by their Mogul husbands. The step-wells were  constructed in Gujurat under the direction of Mogual queens.

And  of course , there is the attention of Thomas Jefferson and his affair and children  with Sally Hemming , one of his slaves as another example of the need that seems the way these days to point to the humanity  of our leaders to often the determent of  acknowledgement of their many contributions.   and this  play  that is discussed on the BBC now has a 17th century  queen acting   like a 21st Century feminist.  Amusing to say the least!

I am a retired elementary teacher, well seasoned world traveler,new blogger, grandmother, and a new enthusiastic discoverer of the wonderfully complex country of India. Anne
View all posts by annetbell →
This entry was posted in Architecture, India, Travel, Uncategorized and tagged BBC, his queen, Mumtaz, Shah Jahan, Taj Mahal, truth or fiction. Bookmark the permalink.

3 Responses to A Twist on the Taj Mahal Story