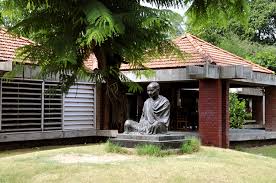 Gandhi built this ashram in Amdavad and lived and planned much of his work  there for nonviolent change in  India.  An Ashram is a place of monastic lifestyle for religious or community purposes.

I bought a book on sayings by Gandhi on our  visit  today. First,  I am sharing his thoughts on democracy. Interesting take from 60 +years ago.

According to my husband, Thomas Jefferson feared the rule of the tyranny  of  the majority  and thus the legislative branch or Congress in the United States has two branches of government. One, the Senate, has two senators from each state no matter the size or population of the states. The other chamber is the House of Representatives which is a true democracy where  representatives  are  elected by  the same number of voters from each district. Larger states would have more representatives, but all have the same number of senators.  Laws do not happen without passing both houses of legislature.

Sic semper tyrannis is the Virginia State Motto which is Latin for Thus Always to Tyrants which has become a cry against all misuse of power.

It seems in my opinion that both Jefferson and Ghandi were able to see the seductive and corrupting  nature of power. It seems a constant vigil is needed  to counteract such misuse of leadership in our world today as it was in the past.

I would love to hear your thoughts.

Here is a precious post I did on Gandhi.

4 Responses to Ghandiji and Democracy. . . .