I usually don’t have writer’s block, because I tell my stories and write just like a speak,  as one of the students pointed out. I think the hesitation is due to the fact that this event has moved up to one of my most memorable in India, and I want to convey that to you. Well, here goes as I am armed with Royd Zhang’s wonderful photography. . . so  I will begin at the beginning.

A couple of Saturdays ago, actually the first  with all  12 of us in Amdavad, we went on the Heritage Walk, which you might remember in Sights of Amdavad. There is a saying in India that whomever steps in cow dung first is blessed.  And guess who it was?  Me, because I just want to look around or talk all the time and not watch where I step.  Well I did receive a blessing later in the day with an invitation to a birthday party !

It was the day we starting touring at 7 and finished in exhaustion at 10 PM. Our wonderful rickshaw drivers Selim and LaLa had suggested that we attend the Muslim festival starting late afternoon in Old Town where they live.

We had to walk several blocks as the streets were blocked off .  I asked David if he thought it possible that all 1.9 million Muslims who live in Amdavad were attending the festival?” His reply was, “It’s possible!”  And wow, look!

There were people as far as we could see, all standing waiting for the parade.  But we quickly became the sight to see or welcome with warm smiles and “hello!”  Everyone was very polite in this crowd of men, asking us where we were from, our names, wanting a hand shake. . . . more of the welcome we have been receiving wherever we are in Amdavad.

David is in his baseball cap and Cassie and I are to his left with Sarah, Sara, and Palen in the front. Selim is a few steps behind David, keeping  watch. 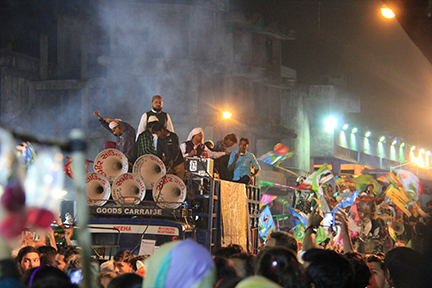 There were floats for men and then others for women. . . .  Ice cream is a favorite in all cultures.

As dusk fell and it became darker, Selim suggested that we move on from the crowd of men watching the parade.  We went near his house in Old City to where the women and children were gathered to see the parade. Again, we were met with smiles and handshakes and  “Where are you from?”  Not one person refused  my smile or my  hand.  This is my favorite picture of the children handing out and waving from the balcony.. . . Isn’t it amazing?

Here the women and girls are showing us their Mehndi or henna hand tattoos which are a sign of celebration and particularly done befor marriages. 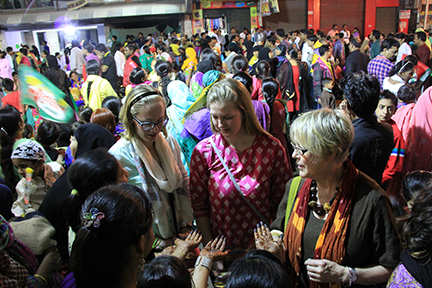 Here is LaLa with this little boy standing with us. 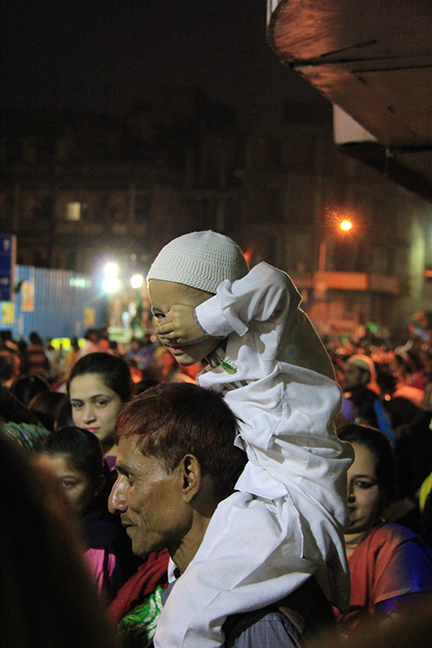 This is an interesting fact. Notice LaLa’s henna colored hair?  That is the sign for all to see that he has been on the Hajj to Mecca.  Muslims are required or maybe encourage to visit Mecca once during their lifetime.

As we turned to leave with flags waving and fireworks exploding, the exhaustion set it from  the fact that we had not eaten since noon.  As I walked and my head cleared a bit, I had this most startling thought. We , this little group of Americans, attending Mohammed’s Birthday Celebration in Amdavad, India were experiencing “friendship diplomacy.”   We may be the only Americans they will ever see , speak to, smile out, or connect with .  We were not intent on evil nor were they. We were obviously different in many ways but the same in our humanity and that we are all created in the image of God.

Well, on this Sunday night in Amadavad, the hatred and evil on both sides  ended. Oh if only our government and theirs as well as the extremists could      meet and experience “friendship diplomacy?”   I know I am a hopeless Polyanna, but it  certainly could  be a start in “loving our neighbors” instead of killing them!

My apologies to Royd Zhang for having to make his beautiful photography smaller because I couldn’t download the larger files.  Royd is in our group.