Sights and  sites yesterday and today sounds.  Before I start you should know that  I don’t like silence at home or pregnant pauses in conversations!   Even in India I want the TV on and there are all Hindu channels except CNBC Financial News so the viewing is limited !

The first morning, I awoke at 5 AM to the call to prayer for the followers of Islam.  I remember the soothing sound from early mornings in Cairo.  I like the sound, the idea of starting the day with prayer, and the thought that this has been done for thousands of years.   Here is a picture of the Friday Mosque in Old Town from my post yesterday. You can see originally there were minarets on the front that are absent today.  During the earth quake early in 2000s, the towers either fell or were damaged so  much that they had to be demolished. 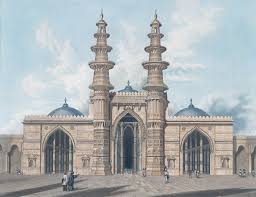 The animals rise with the sun so the myriad  of species are chattering away. The lovely green parakeets are flying , chattering, and perching in the trees in front of the hostel.

And of course the crowds of monkeys everywhere are screeching and howling and begging for food. 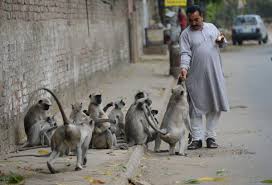 Later in the morning the school children arrive at the large elementary school at the end of the lane. Hearing them laughing and calling and shouting brings back wonderful memories of my students in the past. The uniforms are a tradition from the years  when India was a colony.

Last but not least, there is a totally unpredictable sound with the elevator at the hostel.   If the outside door and the folding door are not closed completely after use, this  song (but not this rendition) below  plays, and plays, and plays until the doors are shut properly. Never in a million years would you guess the choice and  believe it or not, it plays all during the year and not just seasonally!

Of course these noises heard from the hostel, blend with dogs barking, and the continual honking of horns.  Ah India.. . . . .

I would love to hear your comments !

6 Responses to Sounds of Amdavad