Derry or Londonderry  was to be a night stopover on our way to the Giant’s Causeway when we were in  Ireland in the summer of  2010.  What a surprise to have it worm its way into our hearts.  David plans our trips as to not waste a moment.  I whine that I am tired and he says, “Anne, you can rest and sleep at home!”  Later, remembering  the amazing sites we visit , I am glad.

We stayed almost exclusively in B&B during our time in Ireland. David booked them on line and  there were no bad experiences. I love talking to people who live where we are visiting, having them recommend places to see and experience and to have at least a home cooked breakfast in the morning.

We stayed in a simple home row house on the outside of the walled entrance to Derry. I don’t have a picture or even the name of the sweet woman who was our hostess. Our room was on the third floor , only accessible by very old and windy stairs. There was no fire escape!  After, washing up and heading out for the city, the hostess asked us our plans.  The architect said, first we were going to walk the top of the wall around the city. Derry  is very special and quite famous as one of the only intact medieval walled cities in all of Europe.

We set out to head for the nearest  of the four gate entrances to the city. 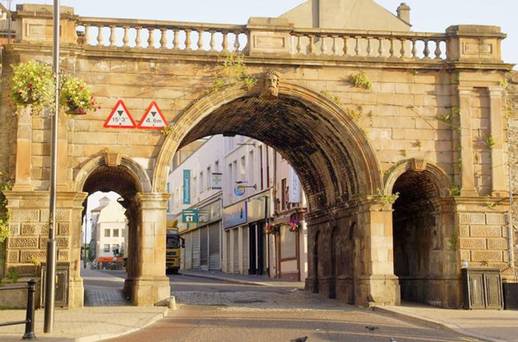 The ancient medieval walls cradle and protect the center city.

This image shows the hills in the center of the city.

Here is a map of the walled city of Derry. 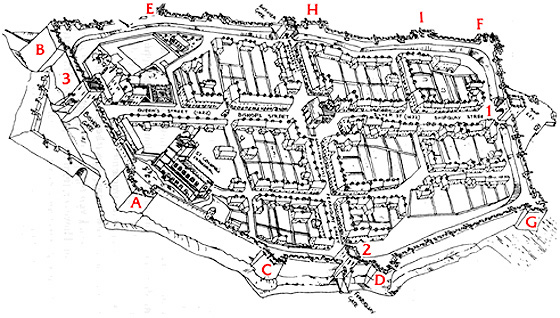 Because this is an old drawing, you can’t see the new city which  today surrounds the walls from the other side. The 17th century  wall is intact, and the  height, thickness and age of  it are remarkable. Construction was begun in 1613 an completed in 1618.

The stairs on the wall walk show you the change of incline as you circle the hills of the city.

You can see the width  of the wall !

I found this video celebrating Derry the first  cultural city of Britain. It gives some flavor  of the city.

Tomorrow , I plan to post about Bogside and the heart of the matter of “Bloody Sunday”  in the history of Derry.