Originally Posted on March 15, 2013 by annetbell
Sadly this nightly event has stopped recently because of the troubles in Pakistan.  I don’t know if we will get to do this when we are in Amritsar this time. It was such a marvelous sight!

Darn, just when I thought today’s post would be a short, fun description of the famous nightly border closing ceremony at Wagah, we went to see Attacks of 26/11. Though it was in Hindi, the message was very clear in actions and in facial expressions. Terror, hatred, pain….Now I see those faces along with other memories,  pictures, and thoughts of friends both Indian and Pakistani.  It is not a simple picture.

First, let me tell you about the border closing. It is nightly at Wagah, the last border check-point on the Pakistani Indian border about 18 miles from Amritsar in the Punjab. All along the road there were large tractor trailers filled to capacity but parked. The guide said it can take up to 3 days for the trucks to be cleared to cross the border. Security is extremely tight.  I had been told that no bags either backpacks or purses are allowed, and we would have to show our passports.  Traffic was heavy and as we pulled into the parking lot, venders were hawking their wares. Our security was faster in the “foreigners’’ line, but we still had the physical pat down which some of the girls object to. No one likes it and it is uncomfortable but it seems to be a necessary invasion of privacy, these days, in order to insure as much safety as possible.  We had bought small Indian flags to wave and got settled in our bleacher seats. 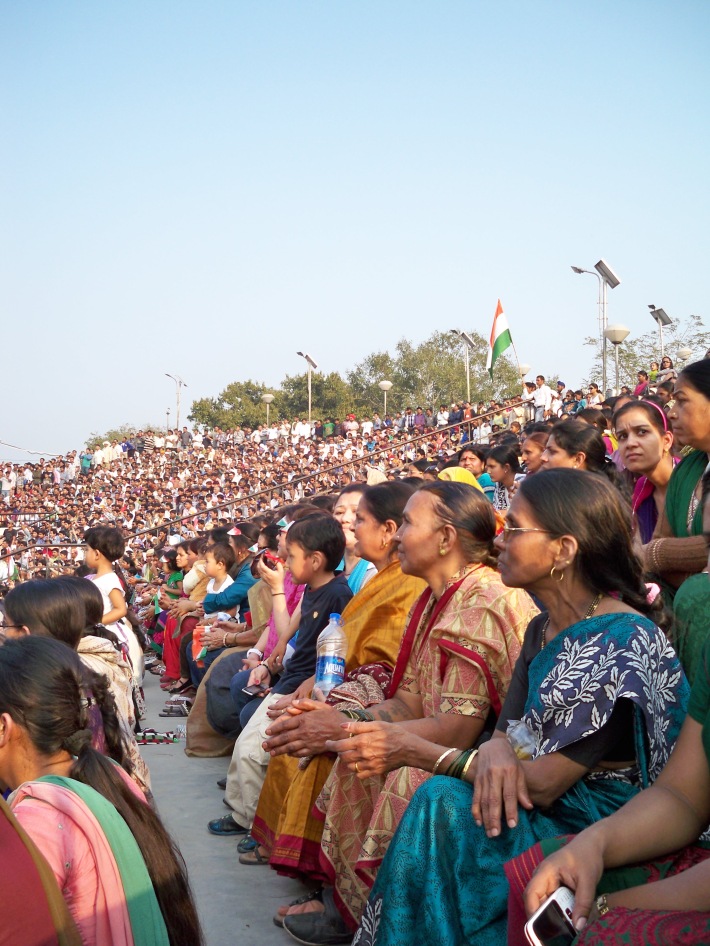 The atmosphere was one of a sporting event  with chants and cheers from both sides and much flag waving. It could have been a cricket or football match between friendly rivals. 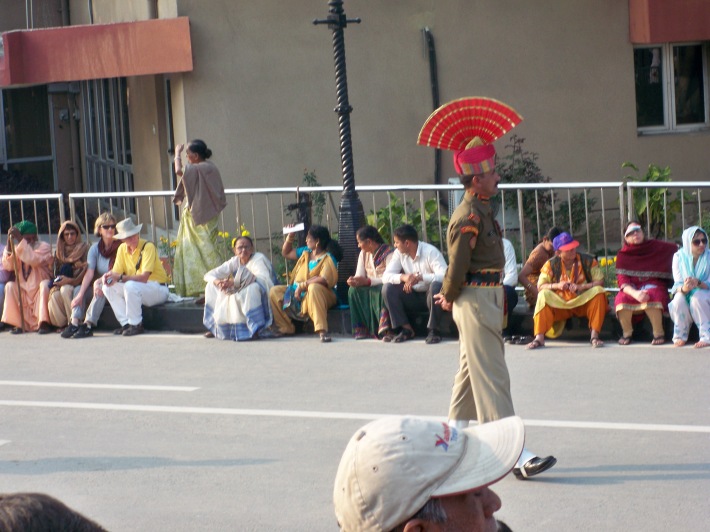 A soldier from each country in finest dress uniform, goose stepped toward the other with wild cheering all around.  Their steps perfectly mirrored the other. The flags were lowered, taps blown, and it was over.

The crowd dispersed, and we were requested to be photographed. Everyone was in good spirits. 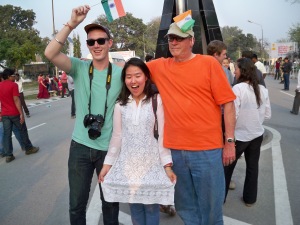 There seemed no anger or animosity towards Pakistan. It is easy to forget that the two were once one country and it was here in the Punjab in 1947 where the division into two countries took place.  Even during a period of all-out war, when the two governments thought this nightly ritual was inappropriate, loud cries of “No” were heard from both sides and the ceremony continued.

Now, here are my humble opinions on these matters. The attack in Mumbai movie was told by the Indians showing horrible slaughter of men, women, and children in a hotel, hospital, café, and cab. Of course, we couldn’t understand the dialogue, but no particular reason for the attack was made or was clear. The men from Pakistan made a political statement loudly and clearly. The Indian police were caught unprepared, armed with only stones and sticks. There is much tighter security now all over India. My opinion is that religious differences are not the root of this hatred. My life experiences have shown me that people of different faiths often have a bond and respect for each other even while disagreeing over theology.  There is a kinship of being “faithful” people. I think governments “gin” up the people by accentuating the religious differences which turns to passionate hatred. The real purpose for war is often power, disputes over land, or votes. I saw that in Northern Ireland, where the British were afraid to allow the Irish to vote because their sheer numbers would overthrow  England in an election.

Before moving to Phoenix, I was a real law and order person about the illegal immigration questions prominent in the news in 2005. But after seeing men wait to work for hourly wages, some working 10-12 hours to send money home to their families in Mexico, I witnessed the “faces” of illegal immigration.  At night, the men would stay in crowded flop houses filled to capacity just for a place to sleep before going back on the streets. These men are real, the problems are real here and in Mexico, but something needs to be solved, and while we need to be a nation of laws, we also need to care about “the least among us.”

I have dear friends both Indian and Pakistani whom I cannot imagine hating and killing each other. But this hatred and killing is happening here often according to the news along with severe atrocities. There are angry, hate-filled people in all cultures and religions, but there are loving, peaceful ones as well. I have no knowledge about past or present wrongs on either side, but I do know that violence often makes  change for only a short time. There needs to be heart changes on both sides that move toward mutual respect. I hope and pray this largest of the world’s democracies, birthplace of Gandhi, can reach a prosperous and powerful peace with her neighbor, Pakistan. Change for all of us can be slow, arduous work, but it is worth the effort.