Posted on January 25, 2014 by annetbell
Recent article from The Economist
Indian mothers-in-law 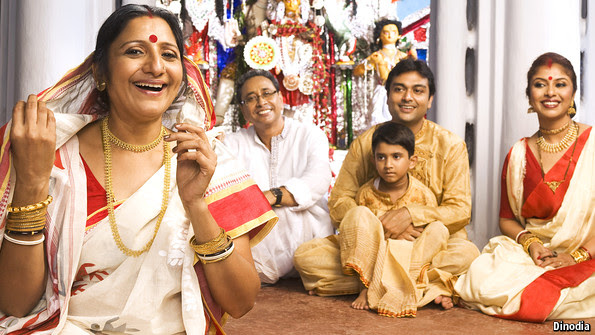 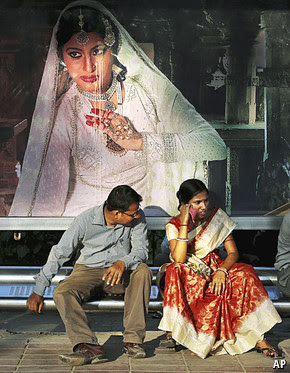 When the women clash, tradition makes clear where male loyalty lies
Sons rarely grumble—why would they? Anyway, a rigid family structure fixes roles for men too. When the women clash, tradition makes clear where male loyalty lies, says Mrs Nigam: “It would be very, very disrespectful to take the wife’s side against the mother.” Mrs Venugopal relates the tale of a man caught between his Austrian wife and Indian mother. The women live on the same street, so he sleeps at his wife’s flat, “but has to walk back to his mother’s house to brush his teeth in the morning”.
The soap-opera sagas of the domineering, conservative saas battling her prettier bahu over food, clothes, men, children and money appeal because such clashes are widespread. On screen the younger woman mostly submits. Mrs Venugopal worries about the message that sends. Such programmes “offer terrible examples of how to behave”, she says; “the most abused women I met were the most hooked on the TV shows.”
Yet despite the persistence, in some places, of the old pattern—including in some prosperous families—in the country as a whole technology, urbanisation and education are changing saas-bahu relations, just as they are transforming much of Indian society. In 1951 just 9% of women could read even a word or two; today two-thirds can. The educated expect to keep working after marriage; divorce rates are rising. Many women are rejecting sindoor, vermilion worn in the hair to signify devotion to a husband. And the bahu is beginning to strike back.
To observe that shift in practice, visit Hatfield private detective agency, one of about 50 such outfits in Delhi. It was founded in 1991 by Ajit Singh, a man with a Poirot-thin moustache. Mr Singh has placed comical props around his office: a black Trilby and dark glasses, Sherlock Holmes paraphernalia, an oversized magnifying glass.
Business is buoyant, he says, in part because of a busy line in “marital investigations”. (Marriages are still arranged, for the most part, increasingly online.) Mr Singh charges 20,000 rupees ($323) to double-check a potential daughter-in-law’s family background, reputation and employment. For 300,000 rupees some of his 50 staff will chat up servants at her house, pose as financial investigators, call old friends and trail her. The most important question is whether she is gharelu, “homely”, meaning subservient, timid, hard-working.
Strikingly, his customers now include rising numbers of brides (and their parents), too. “The majority of the girls have a very high expectation of marriage—and it doesn’t meet reality,” says the detective. These clients ask of the groom’s mother: “Is she God-fearing, quarrelsome, friendly with the neighbours, how does she deal with the maid, is she going to temple, does she spend all day in the markets, at kitties [parties], and is there any drinking? Because the girl is going to marry that house, she is going to spend a lot of time with that lady.”
Brides have become more assertive: “Twenty years back the majority of girls were dependent, but now they work,” Mr Singh observes. “They don’t tolerate the bullshit. It has become very tough to be a mother-in-law now.” Women also hire him after marriage, he says, amid rows over family finances, to learn what assets are at stake. He tells of a saaswhom his team followed daily, to chronicle the parties and clubs she attended and the money she spent. “The daughter-in-law wants to know her weak points,” he says, chuckling.
Young women are also better protected by the law, at least in theory. Neena Dhulia, of the All India Mother-in-Law Protection Forum, fumes that 15 recent laws relating to women (on dowries, domestic violence and so on) amount to a licence for “an intolerant young generation of women” to destroy families. “The mother-in-law is the main target and is referred to as a demon or a monster,” she complains.
Mrs Dhulia’s organisation was founded in 2009, with the aim of defending the traditional extended family. She sees a conspiracy by official bodies such as the National Commission for Women to “break the Indian families; every government department is involved in this extortion.” In protest, her members won’t celebrate Independence Day onAugust 15th, drinking only sugarless tea “because we feel the Indian husband’s family is still shackled.” According to Mrs Dhulia, “The main problem is that today’s women are educated, but not in the proper way. Parents are incapable of teaching the daughter how to stay in her in-laws’ house.”
But should young wives simply endure abuse? Mrs Dhulia retorts with a Hindi saying: “once you go to your in-laws’ house, only your dead body should come out.” Too often, this is still literally true. Among 12,000 prisoners at Delhi’s sprawling Tihar jail, a portion of female inmates are kept in a dedicated, barracks-like “mother-in-law wing”. “Most of the time the women say they acted in a fit of anger,” says a spokesman. Their victims are daughters-in-law—beaten, ill-treated as menial servants or assaulted over dowries.
In modern India, however, it is often mothers-in-law like Mrs Dhulia who feel aggrieved. Maitri, a charity, helps destitute widows in Vrindavan, a town crammed with devotees of Krishna and backpackers searching for weed and their souls. Its clients queue up to berate their daughters-in-law. One says tearfully that her bahu broke her leg. “Brides arrive in the house prepared, they can’t be abused, they do the abuse,” she laments. Another says her worst mistake was picking an educated woman as her son’s wife. 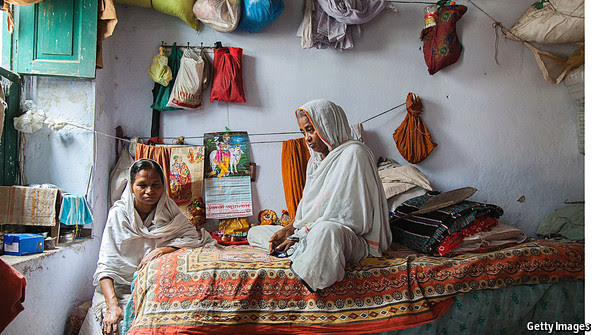 Saasy no more
Among these unfortunates is Renubala, the woman who, as a bride in Tripura, had worshipped her own mother-in-law as a goddess. Her life straddled the transformation of Indian families and society, and she wound up suffering again when she became a saas herself. Sitting on the floor, she wipes a metal plate with the end of a grubby sari and calls her bahu a “tigress”. The younger woman was 30 at marriage (the average for Indian women is now up to 21). Renubala says she was denied food, prevented from speaking to her son, suffering abuse and violence.
In the end, she says, her son told her he was taking her on holiday, only to abandon her in Vrindavan, 1,400km from home. With a smear of mud on her forehead she now begs for alms, singing devotional songs and reciting the 108 names of Krishna. Her son won’t light her pyre, she accepts, though she sends him what she gets by begging. Asked to explain the changing fortunes of mothers-in-law in India, she says: “we are living in the time of Kali Yuga”, a mythical era of strife, when human life is only lust, greed, broken vows and violence.
The time of Kali Yuga 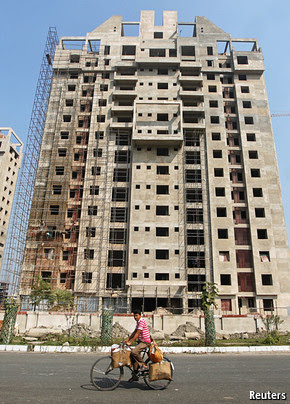 The rising concrete is unmistakably for nuclear, not extended, families
The tide is in the bahu’s favour. For further tangible evidence of that, drive out on the swanky new highway that whizzes tourists from Delhi to Agra and the Taj Mahal. On either side of the road stand the shells of half-built residential blocks. They contain flats with two or three bedrooms—space enough for a couple and a baby. The rising concrete is unmistakably for nuclear, not extended, families. A census in 2011 confirmed this trend: it found that only 18% of households contain more than one married couple, a share that is falling a few percentage points every decade.
Still, the struggle is far from over. The best time to observe saas and bah u together in public is Dhanteras, a part of the Diwali festival, when Hindus celebrate Lakshmi, the goddess of wealth. Families shop together for gold and jewellery. This year at Dhanteras, Rama Krishna Jewellers in Delhi is busy. Customers cram through a gate of flowers. One family studies earrings, the mother-in-law explaining an annual habit of buying something for her bahu.
Relations are good in their joint family, not like the “exaggerations” on TV, the older woman says. “We love to watch them, but know they are not like reality,” she explains. “Am I like a wicked TV mother-in-law?” she asks her plump, pretty daughter-in-law. The younger woman smiles, lowers her eyes, and says “No.”
What do you think?  Are there other stories or experiences  out there? Any different stories of Indian mothers-in-laws? Do you know of some loving mothers-in-laws?
Thanks to my friend , Judith for the article.

I am a retired elementary teacher, well seasoned world traveler,new blogger, grandmother, and a new enthusiastic discoverer of the wonderfully complex country of India. Anne
View all posts by annetbell →
This entry was posted in Uncategorized and tagged blogging, daughter-in-law, family, Inida, Mother-in-law, The Economist, traditional. Bookmark the permalink.