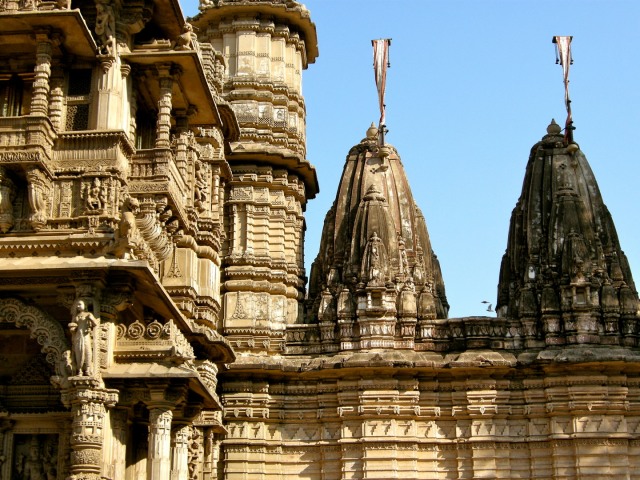 One of our first site visits on the north trip to Rajasthan , was to several Hindu temples.  This one called Eklingji or Meera is a complex of actually 108 individual temples. Many are only single rooms for prayer. This complex of all the northern temples remained vividly in my memrory. I am not sure why, but I think it could be the setting which was in a small village with the temple  seemingly squeezed between buildings at the entrance and then  opening into space behind to provided for the sanctuary. The opening was elaborately carved stone around  a small entrance door.  We arrived just at dusk fell  as the 35 miles from Udiapur took longer than expected due to heavy traffic , buses and cars, as well as camels, winding roads and the never ending bikes. The approaching darkness added to the mystery. 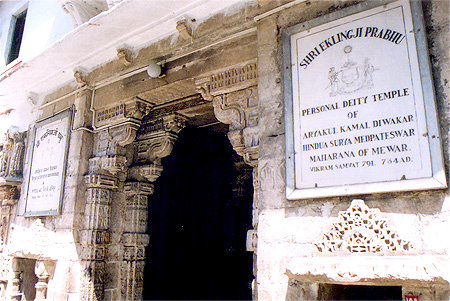 Entering through the small door, we were in the foyer where we left our shoes which was mandatory in each consecrated temple we visited. Some would allow socks, but others insisted on bare feet.  We were asked by flower vendors and fruit and rice sellers to buy offerings.  Also there was an older man near the door who wanted to bless us with the orange powder spot placed with his finger on our forehead. . . . .for a small tip. Our guide told us we were not to smell the flowers because the sweet scent was for lord Shiva only.  Women were expected to cover our heads which wasn’t a problem as we had all follow in love with the lovely Indian scarves and always wore them.

Next we entered a long corridor constructed by huge stone blocks on the floor and the walls that seem to rise up, up , up on either side. It made me think of the pictures I have seen of the windy, narrow, ancient streets of Jerusalem.

Entering the sanctuary, our senses were assaulted by the flickering candles, the only light source, the continuous, high-pitched  chanting, and the colorful saris worn by the faithful women. Then I was hit with the realization of being in the center of ancient worship of an ancient religion in the year 2013! I think little has changed in this temple first built in the 8th century. . . . . .1300 years ago! The priests took the plates of food and the flower garlands and placed them before lord Shiva.  He was represented with four heads and made from black marble.

The bell was ringing over and over and the sound reverberated as it bounced off and on the stone surfaces so  we left.  By now the moon had risen high in the sky and with the absence of electricity , we saw little to none of the other temples. The architecture, the carved stone, the ancient ceremony, the colorful flowers, the chanting, flickering candles, we soon became accustomed to on visits to other temples. But Eklingji was memorable and mysterious as one of our first!

42 Responses to Eklingji or Meera Hindu Temple in Rajasthan