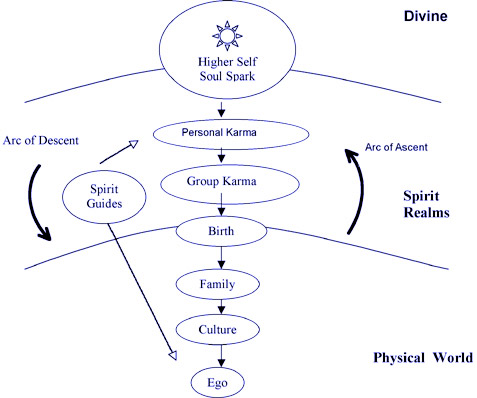 Hinduism is the  world’s fourth largest religion with seven hundred fifty million  devotees. It was founded in the North of India, 4,000 years ago near the Indus River.  This makes it the oldest exiting religion in the world. 80% of all the modern Indian  population  are followers.  Reincarnation, a belief of “life after death,”  was begun with Hinduism.  They believe that the soul is eternal and lives many life times in one body after another while the  preceding body, or container of the soul, rots or is burned up.    The body may be  human,  animal, or plant.  They believe that any form of of life contains a soul (atman) and thus has a chance  to experience life in different forms. Good deeds or works preformed  means you will move up the cycle  in the next life. Moska is what all are working to attain which is the ultimate release from  samsara (reincarnation).  For more information read my post and watch the video on Veranasi, the holiest Hindu city in the world.

The ancient Egyptian religion also believed in life after death and it was a huge part of  their faith system. It was not a belief in  reincarnation but life after death.  It revolved around the mummification process  perfected to prepare the dead body for the next life.  This belief was so prevalent and strong  that for years there was little invasion of other lands because the soldiers were fearful of dying outside of Egypt.   If they were killed, their  bodies  would not be mummified, thus they would be loosing out on the next life.

The dead must pass the light heart  weighing test. This signified the heart that is not weighed down with evil or sin is light.   See Anubus the jackal headed god weighing the heart which must be lighter than a feather.

If this test is passed then there was a ride in the boat of Ra,

the name must be written down on a cartouche in the coffin  and then the body must be mummified or embalmed as we call it today. 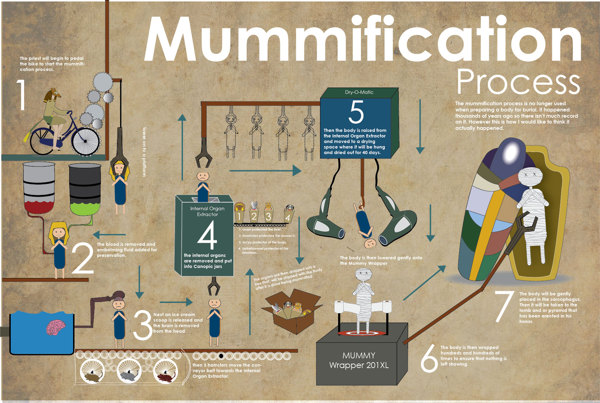 There are quite a few steps  in this process, but I am going to just write  about a few of the steps my students always enjoyed.   The priest were the ones who performed these steps at least on the wealthy and the Pharaoh.  The whole process took 70 days. 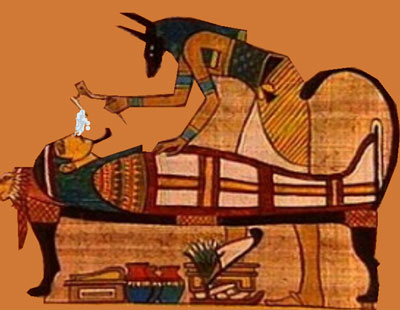 Here is a picture showing  the  body’s brain being  pulled out of the nose  with a hook similar to a crochet needle!  Students always remember this fact!  The Egyptians believed that the brain was of no importance and its only job was to produce mucus! Sinus  trouble in ancient Egypt!

These are canopic jars for the internal organs the Egyptians thought were necessary in the after life.  The liver was put in the human head jar, the lungs in the baboon jar, the stomach in the jackal and the falcon held the intestines. The organs are mummified before being put in the jars.

The heart was left in the body.  The Egyptians thought that the heart was the center of emotion, thought, will , intentions, and the key to the afterlife.

There are many steps of drying, rubbing oil, praying and chanting and finally using linen strips to wrap the body. 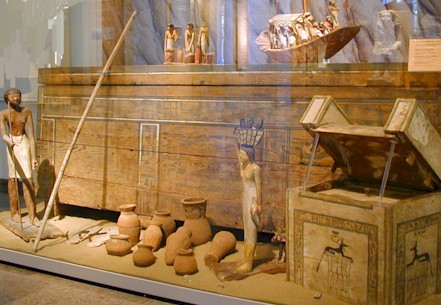 In the Pharaoh’s tombs, favorite items or  necessities  for the afterlife, are buried in the tomb.  At the Metropolitan Museum of Art in New York City, there is wheat on display that was buried in an Egyptian Tomb thousands of years ago.  The opening of the decease’s mouth is important so he can talk and eat.  Amlets are added to the wrapping and prayers are repeat all throughout  the process.  Lastly, a copy of the Book of the Dead is  buried  which included instructions on how to achieve eternal life.

There is much more to tell and available on the net, if you are interested.  I hope that you found the beginning of some of our burial rituals  and beliefs  such as embalming, cremation ( Hindu), and reincarnation were introduced to the world thousands of years ago by these ancient people and their faith systems.

Images from the Public Domain of Google Images

32 Responses to Reincarnation and Mummification