As the students enjoyed  the promised two restful days on the beaches, David and I headed down to explore  the Portuguese footprint in India, mostly the churches. Now we have seen many churches all over Europe, and are not easily impressed. These  churches are  impressive, and this one the most spectacular.   The Portuguese are some of the most devout Catholic Christians  today and their churches constructed  hundreds of years ago, suggest, they have always been religious.

This is St Francis Xavier’s church of the  Bascillica  of Bom Jesus. It is one of the major Baroque churches in India and was completed  in 1602. The image is from Wikipedia. 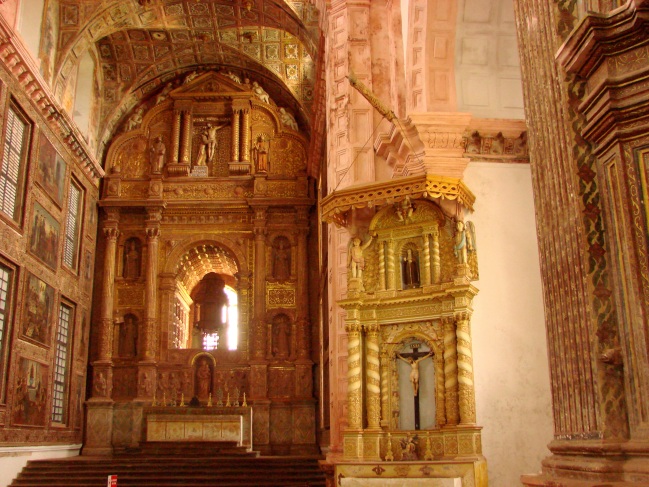 The alter image is from Britannica.com. This church is now on the UNESCO World Heritage list.

This massive tree stands guard at the entrance. I couldn’t but wonder if it had been there from the beginning….four hundred and eleven years.

On the drive to Mount Mary church, we passed this “garden of houseplants!”

Vasco da Gama was the explorer who first arrived in Western India in 1505.  The Portuguese remained a strong presence until 1954. ( Independence from Britain was in 1947.) da Gama was just one of the elusive explorers when I was in school as he didn’t make it to America.  I was glad to see where he landed.

No exploration of ancient sites is complete without some ruins. Once,  our children became so tired of ruins on a trip to Italy, they refused to budge from the car.  I have to admit, sometimes I get tired, too, but not today.  Off we went to the ruins of St Augustine church and convent.  The story is that there was some disagreement between the Augustinians and the Jesuits which lead to the abandonment of this large complex. All that remains is the 46 meter tower and stone pillars.

As our final stop, we headed up a very large hill to Cathedral of Mount Mary which is closed except for weddings and special holy days.

What we had come to see was not the church but the view, which was unforgettable. The dense jungle with the large white churches emerging from the  darkness.  Darkness of imperfect men and faith systems ….darkness of greed and colonialism ….sadly the condition of the human heart.  May  we have courage to move towards the light and let our light shine in the world of darkness.