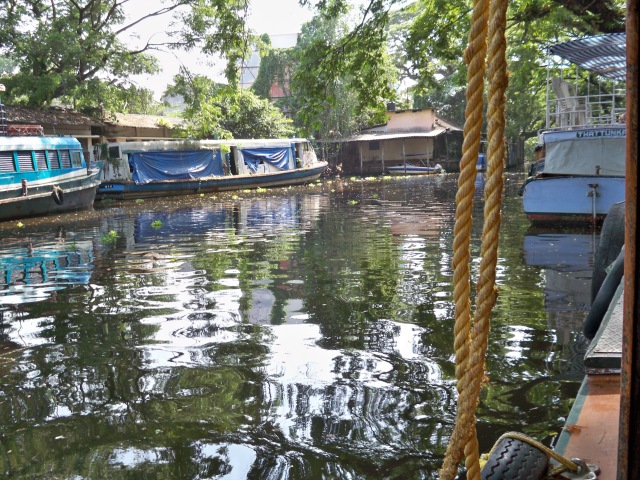 Well, I teased you in a previous  post telling you that jungle is a Hindi word, so here are pictures to show you the reason.  Kerala is an enchanting mosaic of rice paddy fields, coconut groves, wide beaches, backwater labyrinths  and jungle.  People of the three major religions coexist peacefully.  The politics of the region alternates  between the left and far-left  candidates.  A pretty amazing statistic is that Kerala boasts the highest literacy rate in all of India. The ancient boat-building industry grew from the plentiful supply of  wood , the proximity to the Arabian Sea, and many backwater canals. The Snake Boat races of today  are  thought to be the world’s largest team sport. In  ancient times, these boats were used to carry warriors. There are a number of backwater tours available.  One is eight hours and  takes you from Kollam to Alleppey where the bus is waiting.  Some European students, who are also here at Cept, took that route and  found  it a rather  long and repetitive.  David decided on the three hour ride which  was also more cost effective.  It was a humid, hot day and the little boat was a sanctuary from the blazing sun. We had a guide who seemed disappointed that we all just wanted to flow quietly through the water.  Enjoy your trip!

We stopped for a drink and I made a new friend. This hawk was raised from a chick.

One of the many houseboats for hire. The cost is about $200 per night which covers a staff of three, meals and an overnight… Not bad, huh? 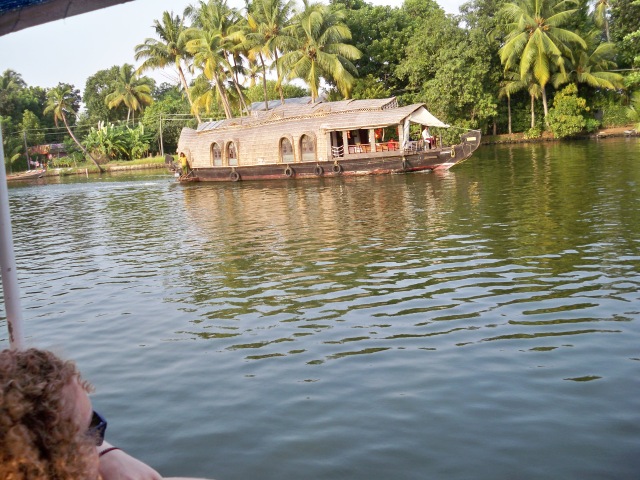 I am a retired elementary teacher, well seasoned world traveler,new blogger, grandmother, and a new enthusiastic discoverer of the wonderfully complex country of India. Anne
View all posts by annetbell →
This entry was posted in India, Uncategorized and tagged boats of Kerala, India, jungle, Kerala, travel. Bookmark the permalink.