Posted on September 6, 2017 by annetbell 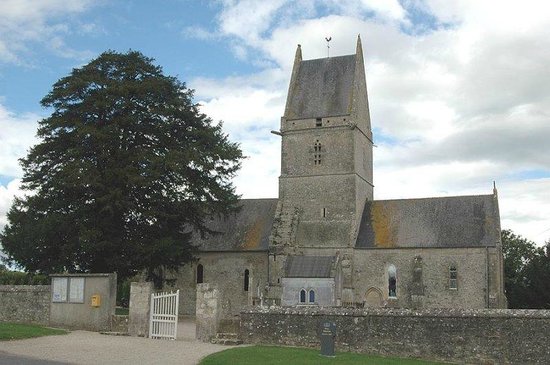 This unassuming country church was  one of the most memorable of our trip. We walked  from our  accommodations at  http://www.domaine-airborne.com/domaine-airborne/. There was a narrow windy road with the hedgerows twisting with no apparent plan through the fields where on the early morning of June 6, 1944 our brave boys of the 101 Airborne landed in this place.  It was a fierce fight.  Dogs were barking, cattle were grazing and we enjoyed this pastoral sight and walk through this place of memories.

As we rounded a corner the church appeared we were approaching without the full affect of the suffering and sacrifice  in this place. 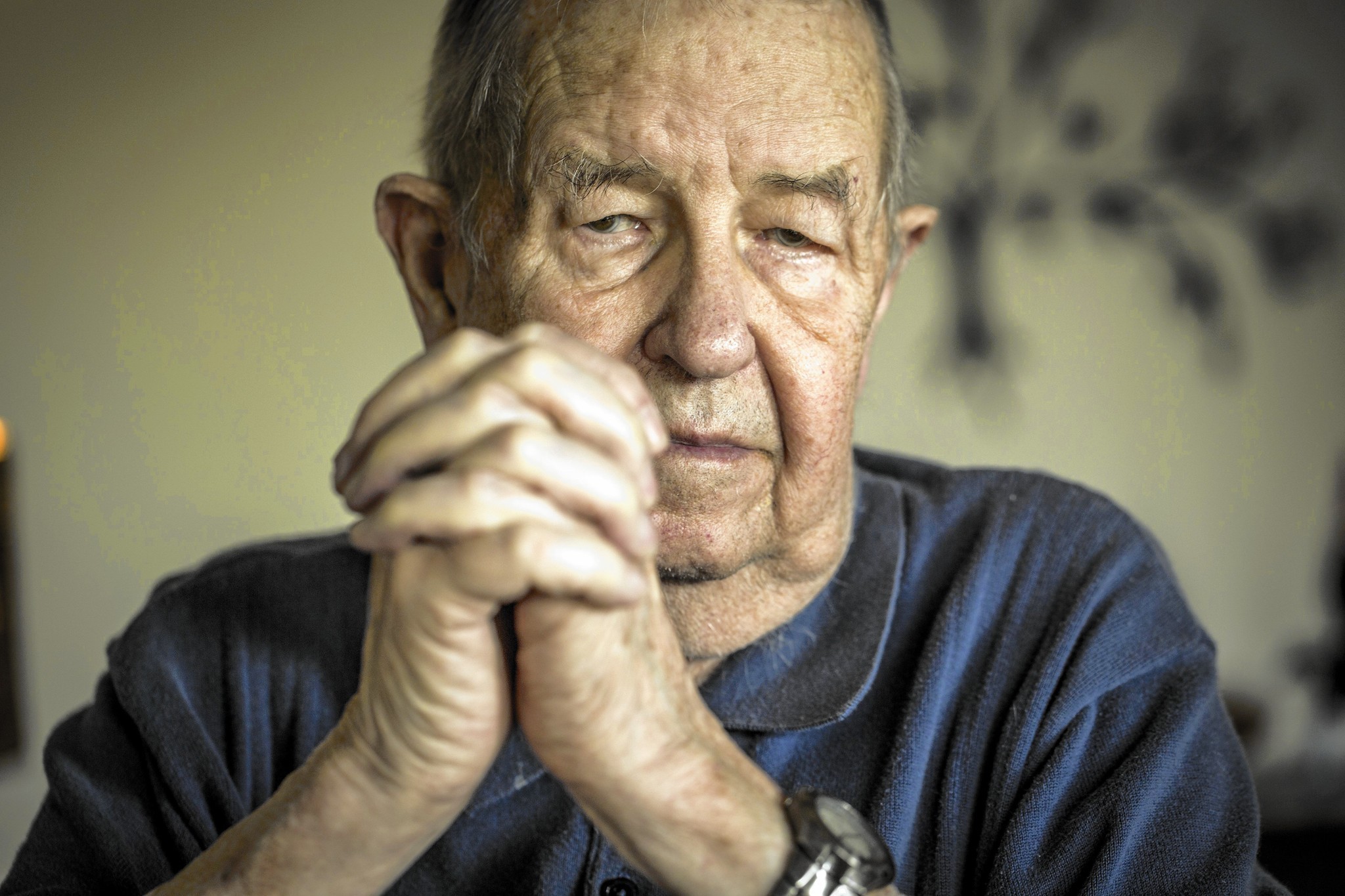 “In the middle of one of World War II‘s bloodiest battles — the 1944 D-Day invasion of western Europe — there was a small sanctuary where no fighting was permitted.

Inside a village church in France, two Army medics — Ken Moore and Bob Wright — cared for dozens of wounded soldiers, using the pews as makeshift beds. Mortar blasts rocked the building, but the medics refused to leave, even when told enemy forces were about to overrun the village.

With scant supplies, they stayed on to administer aid in the packed church, and not just to Americans. They also treated wounded German soldiers who came to the door seeking help.

“They were young men much like us,” Moore said in the documentary “Eagles of Mercy,” “except they were wearing a different uniform.”

Moore, 90, died Dec. 7 in a hospital in Sonoma, Calif. The cause was congestive heart failure, said his son, Francis.

The stone church, located in the village of Angoville-au-Plain, commemorates the medics’ actions with a monument on the edge of an adjoining cemetery.

Photos of leaders, stars and other notable figures who died in 2014.

Moore said in the 2013 public television documentary that he was astonished “Bob and I, just a couple of privates in the service,” received such honors. But Daniel Hamchin, the village mayor, said their role pointed out the dichotomy of that day for soldiers.

Kenneth Jack Moore was born Nov. 5, 1924, in Los Angeles. He was raised by a single mother and graduated from high school in Redding. Soon after the 1941 bombing of Pearl Harbor he joined his buddies in enlisting.

They were young men much like us, except they were wearing a different uniform.— Ken Moore, Army medic at D-Day, on treating German soldiers

“We assumed it would take a few weeks to finish off the Japanese,” he told the Toronto Star this year.

Moore volunteered to be a paratrooper and was chosen to be a medic, although he got only about two weeks of medical training.

He didn’t see any combat until D-Day, June 6, 1944, when he was one of thousands of troops parachuted into France. As a medic, he carried medical supplies, but no weapon.

Hitting the ground, he was quickly under fire. “There’s no substitute for hearing a bullet snap past your head, and you realize that someone is trying to kill you,” he said in the film. “You can’t explain or put into words how that feels, but it forever changes you.”

He and Wright, who died last year, commandeered the 12th century church, designating it as an aid station by hanging a Red Cross banner outside. Wright had more medical training than Moore, but their expertise was limited.

“Our training and our job essentially was to stop the bleeding,” Moore said in the film, “and administer morphine for pain and bandage up the casualties as best we could.”

Wright instituted an order that all rifles had to be left outside the door and the injured began streaming in, by themselves or with the help of others. As the wooden pews started to fill, the medics designated an area near the alter for critically injured soldiers they couldn’t much help.

With Wright taking on the bulk of medical duties, Moore sometimes ventured outside to haul injured soldiers to the church in a cart found nearby. This time, with his Red Cross arm band in full view, he didn’t take fire.

“The Germans were pretty good about not shooting at medics,” he said. “There were several times they could have shot me, and they didn’t.”

At times, the battle raged so close that the building shook violently, blowing out the windows. A mortar shell that came through the roof didn’t explode, but when a chunk of the ceiling came down, it smacked Moore in the head, causing him to bleed. “That’s when I got my Purple Heart,” he said. “I was embarrassed to take it.”

According to the Geneva Convention treaty, signed by the U.S. in 1882, soldiers wounded in battle were to receive aid by medics regardless of which side they were on. The rule was strictly applied inside the church, with Germans getting aid alongside Americans. “I don’t recall any real animosity being expressed,” Moore said.

U.S. soldiers rushed in at one point to say they couldn’t hold the town and they recommended that at least one of the medics fall back with them. But by then, the church was so packed with wounded that blood was leaking onto the floor as well as the pews. “Bob and I looked at each other,” Moore said, “and said, ‘We better both stay.'”

Tense moments followed as the enemy took the area and German soldiers with machine guns came into the church. But seeing Germans and Americans both being treated, they left without incident.

The next day, with Americans again in charge of the area, the situation eased and eventually the aid station was dismantled. In all, Moore and Wright treated more than 80 soldiers, including about a dozen Germans. They were awarded Silver Star medals for their actions, and both served in other battles, including the Battle of the Bulge.

After the war, Moore returned to California and worked for the Chevron oil company as an area representative. He eventually owned several gas stations of his own until the mid-1980s when back problems forced him into retirement.

He occasionally returned to Angoville-au-Plain, where bloodstains can still be seen in the church pews, for ceremonies commemorating his and Wright’s actions on D-Day.

“I think the reason it’s gotten attention now is that we weren’t involved in killing, we weren’t trigger pullers,” he said in the film. “I tell my grandchildren that my role in the war was sort of as an observer. I wasn’t a rifleman killing people, and I was there in one of the big historical events of our century.”

In addition to his son Francis, who lives in San Francisco, Moore is survived by five grandchildren and two great-grandchildren.”

Entering the the poorly cared for church,  chills took over in spite of  the  balmy Normandy  summer day. Maybe it was the suffering, the blood, the story of humanity in the midst of war or the young soldiers of the tender  years in different  uniforms. . . .but it was there.  The first eye catching element was the stained glass window of the  American Paratrooper just before landing.

The interior is simple and bear  compared to the churches we visited in Paris.  During the thick of the battle for the nearby village, two American medics Bob Wright and Ken Moore went to work doing their job of stopping bleeding and trying to save lives as  they cared for German as well as American wounded. They insisted that all weapons be left at the door.  There were little supplies and obviously no beds but the aisle was a natural divider .

The pews were used as beds with Germans on one side and the Americans on the other side. The young medics moved between the wounded caring for each who was  in distress. The stained pews remain today for anyone to see and remember this day in the life of brave soldier medics. Thank you Bob Wright.  Thank you Ken Moore.  Two ordinary American boys , heroes to us all.

Thank you for the demonstration of humanity in the midst of war! 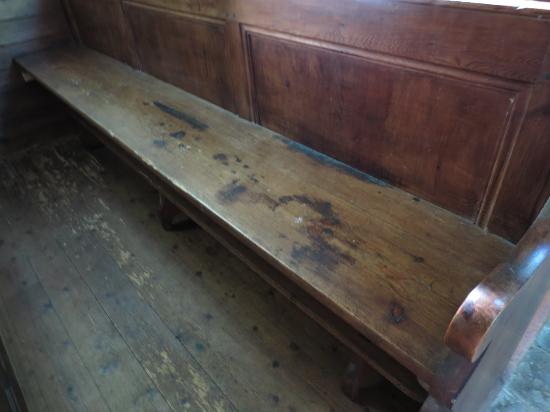