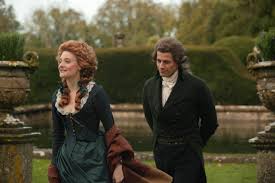 William Wilberforce is the protagonist  of this film. Wait?  Didn’t John Newton write “Amazing Grace?” Yes, he did after his life as a slave ship captain, being imprisoned as a slave himself, and a life changing  conversion.  In the film he says often that he is  haunted by the 20,000 slaves  he transported.

So who is William Wilberforce?  He  was elected to the British Parliament, House of Commons at the age of 21 and was known for his fiery rhetoric .  William had lost his early Christian faith, but he like Newton had a return to it in a moment of clarity during a life  crisis.  Now Wilberforce began struggling with the  choice of using his voice by  remaining a politician or becoming a clergyman to work for a better world. John Newton encouraged him to use his voice for the abolition of slavery.  This leads to a 25 year struggle of education , arguing in Parliament, and endangering his health.  William Wilberforce  was an ordinary man doing extraordinary things , inspired by  the words of another.

“Amazing Grace”  is a strong film with top English  actors, well written story, and beautiful shots of London and the  English countryside. Albert Finney is a convincing Newton as he lives out  his life as a  simple monk, living with his demons and encouraging others in their spiritual journey.

The description of the conditions on the slave ships are sobering as well as the depth of  grief  from John Newton’s past .  Yet his joy at God’s grace are inspiring and touching.

This is a story of real people faced with  spiritual decisions.  It tells Wilberforce’s journey to fight injustice to abolish slavery.  This is the story of a man using  his faith  and opportunities to change the world for good. But  the sad truth is that slavery remains in our world.. . . . .  the sex slave trade, people held in captivity to fish, make bricks, work in construction, as well as extreme poverty and lack of a fair and living wage.

We can be inspired by this 18th century story to step out of our comfort zone to work for justice and righteous for all.

I  discovered that the complete film is available on YouTube for viewing  on your tablet or computer.

I would love to hear what words  inspire you.