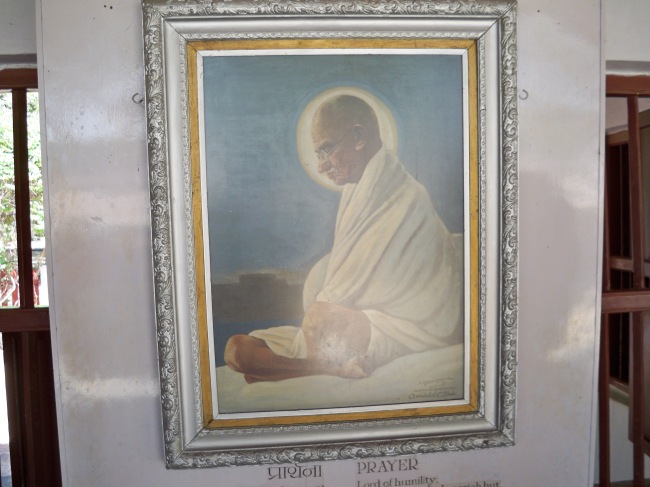 Ghandiji was the name, used by Indians, to  show love and respect for the Father of India. Interesting that he chose non-violence and civil disobedience to reach the desired end for  freedom and self-reliance from England for all Indians.

Two hundred years before,  the colonies of America turned to George Washington to lead their rag-tag army to victory over the British, the most formidable army in the world. Washington was then elected president of the new United States. Unlike Gandhi, who was assassinated by a Hindu radical who was  unhappy that Gandhi was giving Muslims too much in Pakistan, Washington died in his bed of old age and a  repertory infection.  Both men, worked for human rights,  though by different paths and methods they  rejected the unjust British laws, and  worked for freedom for their countrymen.

Gandhi married at the age of thirteen.  He and his wife Kasturba had four children. Gandhi went to study law in Britain and practiced there, though rather unsuccessfully. Next,  he went to South Africa where he discovered non-violent resistance used to improve human rights. While travelling on a train with a 1st class ticket, he was thrown out of his seat due to his color.  STUDENT ALERT:  Remember Rosa Parks’ civil disobedience of the Jim Crow law when she was told to leave her seat for a white man? Now Mr. Gandhi understood how the common people lived their lives when he returned to India and began his life’s work of striving for self-reliance and freedom for all Indians.  He traveled around India to talk to all the people. He encouraged the poor to wash, themselves and their clothes to improve their life conditions. One woman shared with Gandhi’s wife that she would be glad to wear clean clothes, but how was she to do it when she had only the clothes on her back? Mr. Gandhi learned another life lesson that day.  Next he built an enclave near Ahmadabad where he planned and worked for Independence of India.

He also worked for respect for all religions or faith systems, though he, himself, was a committed Hindu.  He lead a famous “Walk to the Sea” to collect salt from the sea brine, in direct disobedience of the English law that forbade Indian collection of salt in order for England to  have all the money for producing and selling salt that was collected all over India. Indians were taxed on their own salt. He was also imprisoned for his resistance as well as using  hunger strikes to challenge and change  injustice.

The Gandhi plan was to become independent and then self-reliant by providing meaningful jobs for all Indians.  He spoke of Khadi and urged all Indians to wear this cotton clothing that was grown and made in India.  He is famous for using a spinning wheel to demonstrate the cotton, silk, or wool into thread, and then made into clothing.  He urged boycotting of all foreign goods.  Even today many years after his death, politicians wear the white Khadi tunics and pants to show their  solidarity with Gandhi’s plan. There are stores all over India today using the word Khadi,  selling only Indian made clothes, home linens, soaps and other made-in-India products.

These photos were taken at the Gandhi Ashram near Ahmadabad.  The site overlooks the river with ghats or stairs  leading down to the water.  It is a Spartan colony on a lovely garden site. His cottage is the one where the man is demonstrating the spinning wheel.  The building with no side walls is the open museum filled with Gandhi’s words.  He wrote 55,000 words during his lifetime. He owned few, if any, worldly possessions for museum displays but the words are  a powerful memorial.

Who knows, but I think Ghandiji would be pleased that today, sixty-five years after his death; India is the largest democracy in the world, with the largest young  college educated work force in the world.  They are ready to change the world.

“Be the change you want to see in the world.” 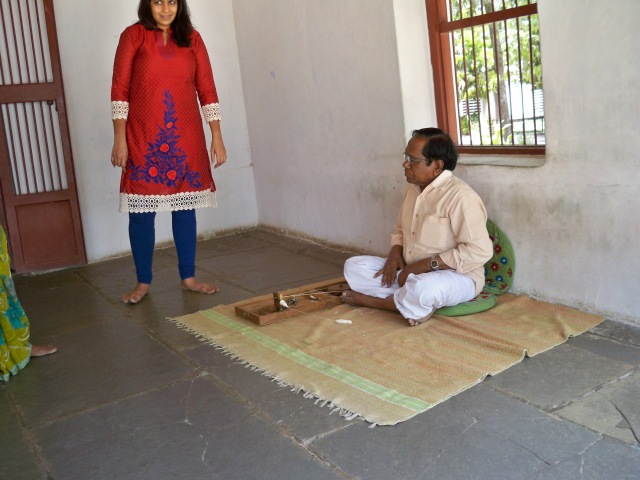 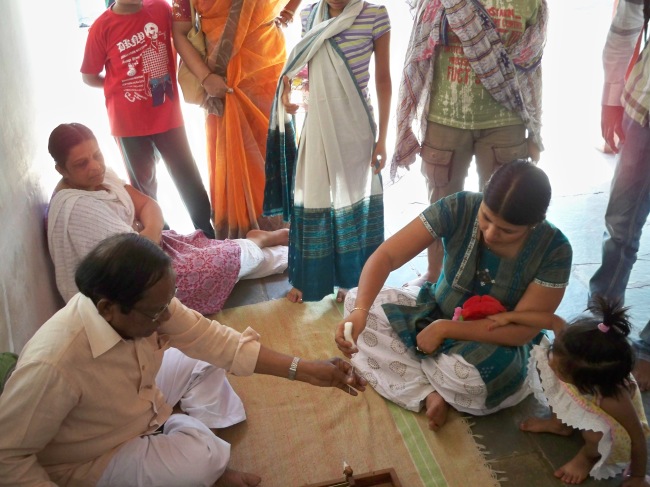 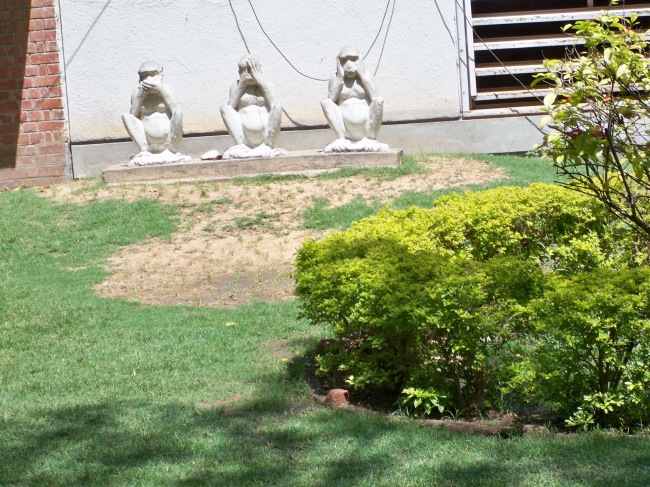 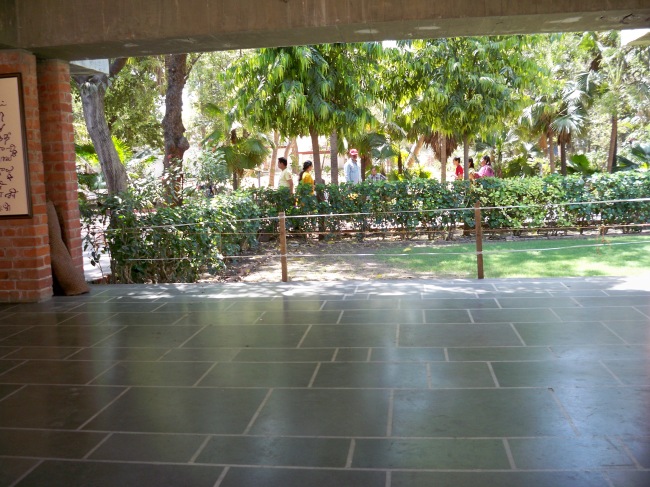 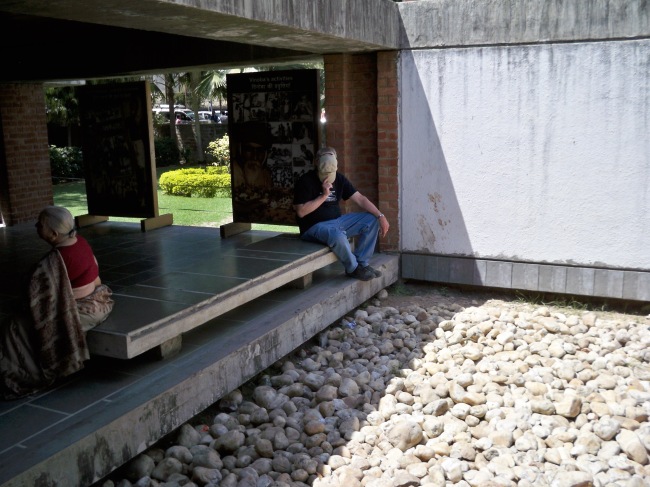 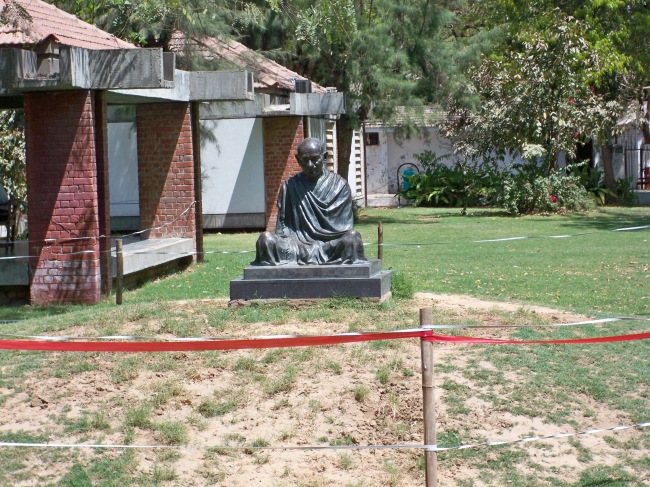