Posted on September 4, 2013 by annetbell

Monday, writing about Labor Day, reminded me of a morning in Cairo, years ago.  We stayed in a great hostel called Garden City House.  It was full of professors and archaeologists, students, and academic people who travel to wonderful places , but on a budget.  We heard about it in Rome at Albergo Sole from a professor.   Garden City is a lovely section where you can see the Nile as well as the bustling city from the balcony.

That morning, we were surveying the wonders of Cairo from the balcony, when I looked to the left and saw a rather high building , unfinished with workers on the top level. Suddenly, I noticed a boy about 8 , I would guess, peering down over the side and waving at us!  Horrified that he was so near the edge, I said, “Oh I wish I could do something to get the child off the building!” But not wanting him to  be distracted and fall, I just waved back!”  We decided that the child had had to go to work that day with dad.  I don’t know which would have been safer running unsupervised in the crowded streets or peering down from a multistory building and waving at the Americans!

It is hard to describe the feeling of seeing things people do making hard decisions just to survive in developing countries. 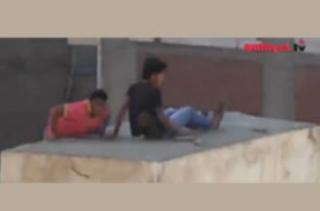 Now to India, where of course we spent a much longer time. We saw children begging, on work sites with moms and dads, children being walked to school by nannies or driven by family driver.

These little guys , at least, have on pants. Lots of Indian children, especially the tiny one run around buck naked. I have no idea about diapers. . . .  . 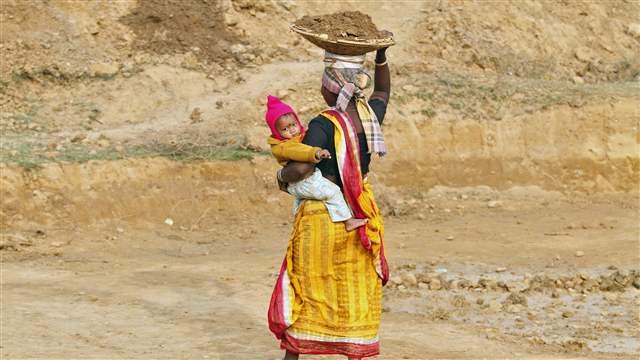 At one stop on our travels , I saw a young woman picking up bricks and carrying her baby.  Next I noticed her squatting, in the Indian squat, to nurse the baby right in the center of the field.

This squatting position is taken by men and women alike. You see them  lined up like this along the road.  It is hard for Americans to  sit in this position unless you are a catcher in a baseball game or do yoga.  I think it is  learned because of the bathroom situation and/ or lack of chairs. Indians adapt.

Young families are  waiting along side a construction site to begin work.                         There are older children everywhere selling postcards or trinkets, especially at huge tourist sites like Amber Fort outside of the “pink city ” or  Jaipur  with its  elephant rides, charmed cobras,  and “The Most Exotic Marigold Hotel.” This is one of the sites tourists swoop in and out of  on their week visit to India.  David’s students were instructed to sketch wherever we visited . They would draw ( pun intended) large crowds of interested observers.  They would show the people  their work and often ask the Indian kids to sign their sketch books. On that day, the students were dumbfounded that there was a 12 year old Muslim boy who was not able to write his name! His life will be pestering tourists  to go  home with a few pennies…rupees each night, for the rest of his life.

I am always very protective of India and though it is easy to post shocking facts and pictures, I want to tell you that progress is being made. Since 2009, there is a law in India for  Right of Children to Free and Compulsory Education. They join 134 countries in the world with that law.  A free hot lunch is provided for all children in the government schools. There was a terribly, tragic  story of children dying at a rural school after having lunch  laced with poison.  But there are many, many children receiving a free education and hot meal each day. I loved seeing the kids in their uniforms  ( a holdover from the British) off to school in the mornings. Though this is available for all Indian families, some are so poor that they choose to have their children selling to make some daily money.  The same is true in Egypt which has the largest free, at all levels,  education system in the Middle East.

The children in both countries know the word baksheesh or money!

This pictures was the most touching to me. My hope is that this little girl will grow up to meaningful work at a fair wage, safety to walk the streets and ride the buses,  clean water and safe, clean facilities, safe, nutritious food,  be able to  dream dreams and have the skills  to attain them, and  after  a strong meaningful education take her rightful place to make a meaningful contribution to her family and  Indian society.

There are lots of people with this same vision for their   country …the work moves  slowly….there are so many souls in India and in Egypt!